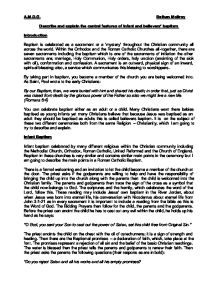 Describe and explain the central features of infant and believers' baptism

A.M.D.G. Bethan McIlroy Describe and explain the central features of infant and believers' baptism Introduction Baptism is celebrated as a sacrament or a 'mystery' throughout the Christian community all across the world. Within the Orthodox and the Roman Catholic Churches all-together, there are seven sacraments including the baptism which is one of the sacraments of initiation the other sacraments are; marriage, Holy Communion, Holy orders, holy unction (anointing of the sick with oil), conformation and confession. A sacrament is an outward, physical sign of an inward, spiritual blessing; also, a service which communicates this blessing to worshippers. By taking part in baptism, you become a member of the church you are being welcomed into. As Saint, Paul wrote to the early Christians: By our Baptism, then, we were buried with him and shared his death; in order that, just as Christ was raised from death by the glorious power of the Father so also we might live a new life. (Romans 6:4) You can celebrate baptism either as an adult or a child. Many Christians want there babies baptised as young infants yet many Christians believe that because Jesus was baptised as an adult they should be baptised as adults this is called believers baptism. It is on the subject of these two different ceremonies both from the same Religion - Christianity, which I am going to try to describe and explain. ...read more.

Amen" Then the candidate is immersed in the water, this is a sign that their old way of life has died, and that the Christian is buried in the tomb the same way as Jesus was. When the candidate leaves the pool this symbolises rising from the dead as Jesus rose from the dead three days after death, their new life as a Christian has begun. The candidate is handed a towel at the top of the steps and his new life begins of loving God and following in his teachings. Explain the meaning and significance of baptism for Christians today. In the modern world today, many people have different beliefs in life, though many do not have any beliefs at all. As we live in a society of free speech and free will. Some people do not take baptism seriously yet for some it will be the corner stone for the rest of their life as a Christian. When a child or an adult is baptised they are welcomed into that particular Christian community as a whole person through the sacrament of baptism. What they have done or said in the past is forgotten and they are able to start a new life as a follower of Jesus. People choose their children to be baptised, as they believe that they can initiate the child into the Church. ...read more.

They think that if the child will have no recollection about the sacrament then the faith that should have been there before the sacrament has been imposed upon the child. However, in baptism the child is being introduced to the Christian way of life and has the security of a relationship with God and the gift of the Holy Spirit from an early age. Some parents want their children baptised even when they do not intend to bring them up in the Christian faith. Now ministers and priests can refuse to baptise children, whose parents have no intention of attending church or bringing them up as practising Christians. When the child is baptised the godparents make vows to help bring the child up into the Christian faith, when the child is old enough to make their own decision then they can take these vows in the sacrament of Conformation. The child may not be old enough to understand what important ceremony it is going through and how this sacrament may or may not be a part of them forever. At least the child has had the opportunity to become a member of the Christian community whether or not it remains with the faith, I think is a matter of their upbringing and their surroundings. I do not think that baptising babies is pointless as it can mean a lot to many parents. ...read more.