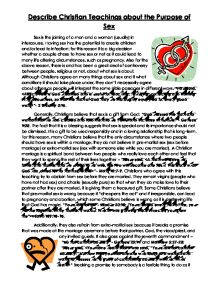 Describe Christian Teachings about the Purpose of Sex Sex is the joining of a man and a woman (usually) in intercourse. Having sex has the potential to create children and/or lead to infection: for this reason it is a big decision whether a couple chose to have sex or not as it could lead to many life altering circumstances, such as pregnancy. Also for the above reason, there is and has been a great deal of controversy between people, religious or not, about what sex is about. Although Christians agree on many things about sex and it what conditions it should take place under, they don't necessarily agree about others as people will interpret the same Bible passages in different ways, "Paul said, <All scripture is God breathed and is useful for teaching, rebuking, correcting and training in righteousness, so that the man of God may be thoroughly equipped for every good work>"- 2 Timothy 3:16. Generally, Christians believe that sex is a gift from God: "God blessed the man and woman that he had created and told them to be fruitful and increase in number"- Genesis 1:28. The fact that it is a blessing suggests that sex is special and its importance should not be dismissed. It is a gift to be used responsibly and in a loving relationship that is long-term. ...read more.

Sex within a marriage ensures that it is controlled; some Christians view sex as a "legal contract" and a commitment that helps to strengthen the couple's relationship further. As well as this, Christians are against the misuse of sex; this includes child trafficking, pornography, rape and prostitution. This is because it is taking the gift that God has given and abusing it for personal gain and satisfaction. 1 Corinthians 6:15-19 states: "Paul said, <You know that your bodies are parts of the body of Christ. Shall I take a part of Christ's body and make it part of the body of a prostitute. Impossible...... Avoid immorality. Any other sin a man commits does not affect his body. Don't you know that your body is the temple of the Holy Spirit who lives within you?>" St. Paul had very strong views against misuse of sex, as many other Christians will too. He believed that people should keep their bodies as a "temple of the Holy Spirit" because God created human beings and breathed the breath of life into them. Therefore, Christians believe that it is important to keep their bodies as pure as God made them, including being sexually moral. Keeping your body as a "temple of the Holy Spirit" may refer to God's breath of life as well as refraining from sin to the body, which St. ...read more.

The Anglican Church "accepts contraception as a means of enabling a couple to enjoy sex and to take responsibility for the size of their family"- http://www.learningeye.net/Mulberry/Files/Religious/contraceptiongap.htm. The Methodist Church shares the same views as the Anglican Church regarding contraception; the couple can choose to use it if they wish. They believe that homosexuality is not right but nevertheless have some tolerance for it: "Politically, the Methodist church has supported civil rights for gays, although it is unclear whether that support extends to same-sex marriage."- http://www.religionfacts.com/homosexuality/christianity.htm The Baptist Church believes that homosexuality is wrong, with the exception of the very few: "To this date this denomination has never appointed a minister whom they knew to be homosexual."- http://www.religionfacts.com/homosexuality/christianity.htm As for contraception, the Baptist Church believe that it is up to the couple whether they choose to use contraception or not. Christians' views on sex and what it is about differ considerably regarding some aspects such as contraception and homosexuality, but agree on others, such as that sex is a gift from God and should take place in a loving relationship, "Jesus said, <Love each other as I have loved you. Greater love has no-one than this, that he lay down his life for his friends>"- John 15:12-13. The views that individual Christians hold depends on their upbringing, experiences and which denomination they belong to - because there are so many different denominations and branches within denominations, there will always be some controversy about what is right. Njeri Chege ...read more.