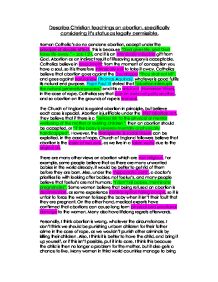 Roman Catholic’s do no condone abortion, accept under the principle of double affect. This is because “God gives life, and God takes life away.” – Job 1:21, and it is an intrinsically valuable gift from God. Abortion as an indirect result of lifesaving surgery is acceptable. Catholics believe in ensoulment: from the moment of conception you have a soul, so it is therefore intrinsically evil to take it away. Catholics believe that abortion goes against the Decalogue“Thou shall not kill”, and goes against natural law(Thomas Aquinas), whatever is good fulfils its natural end purpose. Pope Paul VI stated that “abortion interrupts the natural generative process” and it is a sinful act(Humanae Vitae). In the case of rape, Catholics say that one sin does not justify another, and so abortion on the grounds of rape is immoral.

The Church of England is against abortion in principle, but believe each case is special. Abortion is justifiable under the 1967 abortion act. They believe that if there is a “serious risk to the physical or mental wellbeing of the mother or existing children”, then an abortion should be accepted, or “if the baby is severely mentally or physically handicapped”. However, the therapeutic & social clause can be exploited. In the case of rape, Church of England followers believe that abortion is the lesser of two evils, as we live in a fallen world due to the original sin.

There are many other views on abortion which are non religious. For example, some people believe that as there are many unwanted babies in the world already, it would be better to get rid of them before they are born. Also, under the ‘hippocratic oath’, a doctor’s priorities lie with looking after babies, not foetus’s, and many people believe that foetus’s are not humans; “I don’t kill babies, I terminate pregnancies”. Some women believe that being refused an abortion is discrimination, as some experience contraception failing or rape, so it is unfair to force the women to keep the baby when it isn’t their fault that they are pregnant. On the other hand, medical experts have confirmed that abortions can cause long term physical and emotional damage to the women. Many also have lifelong regrets afterwards.

Personally, I think abortion is wrong, whatever the circumstances. I don’t think we should be punishing unborn children for their father crime in the case of rape, as we wouldn’t punish other criminals by killing their children. Also, I think it is better to have the child, and bring it up yourself, or if this isn’t possible, put it into care. I think this because the child is then no longer a problem for the mother, but it also gets a chance to live. Many women in third world countries manage to bring up children when abortions aren’t available, and they have less money and help than women in England, so I don’t think having no money is a good enough reason to kill the baby.