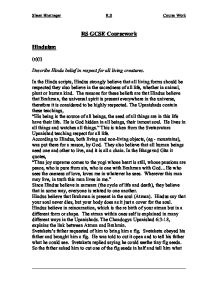 Describe Hindu belief in respect for all living creatures.

RS GCSE Coursework Hinduism (a)(i) Describe Hindu belief in respect for all living creatures. In the Hindu scripts, Hindus strongly believe that all living forms should be respected they also believe in the sacredness of all life, whether in animal, plant or human kind. The reasons for these beliefs are that Hindus believe that Brahman, the universal spirit is present everywhere in the universe, therefore it is considered to be highly respected. The Upanishads contain these teachings, "His being is the source of all beings, the seed of all things are in this life have their life. He is God hidden in all beings, their inmost soul. He lives in all things and watches all things." This is taken from the Svetasvatara Upanishad teaching respect for all life. According to Hindus, both living and non-living objects, (eg - mountains), was put there for a reason, by God. They also believe that all human beings need one and other to live, and it is all a chain. In the Bhagavad Gita it quotes, "Thus joy supreme comes to the yogi whose heart is still, whose passions are peace, who is pure from sin, who is one with Brahman with God...He who sees the oneness of love, loves me in whatever he sees. Wherever this man may live, in truth this man lives in me." Since Hindus believe in samsara (the cycle of life and death), they believe that in some way, everyone is related to one another. ...read more.

Many Hindus believe that eating meat is unhealthy because it may contain preservatives and poisons. Hindus believe that meat arouses the passions of anger and sex. They believe that when you eat meat, your breath becomes contaminated, and it shouldn't be when the sacred mantras from the Vedas are said. Many Hindus follow the law of dharma, and their dharma may be to follow the rule of ahimsa. The rule of ahimsa is, non-harming, non-injury, non-violence, and respect for life. This is a key obligation for many Hindus. Hindus also believe in the law of karma, that all actions have consequences. If we inflict injury or pain, we will experience the same suffering in the future. Hence, if we needlessly kill animals we will have to be slaughtered and eaten in our next lives. Hindus believe that "you are what you eat." If you want to live in the highest status of spiritual consciousness, then you must eat appropriate foods. You can do this by eating "sattva" foods. This is one of the three "Gunas." Food with sattva brings goodness and kindness. Eating foods such as fruits, vegetables and rice will bring these qualities. The other two Gunas are Rajas and Tamas. Rajas are energy and passion. Eating cakes and sweets will bring this. Tamas is darkness and sleepiness. Eating meats brings this. Hindus may be vegetarian because of health reasons. Research suggests that a vegetarian diet may be healthier. It is easier to digest, and provides a wide range of nutrients. ...read more.

If you were to disagree you could have a valid reason, as Hinduism isn't al about non-violence, as in the Bhagavad Gita, it tells of a story where Arjuna is preparing to fight his own cousins in the terrible war. When the armies lined up to face each other, Arjuna is suddenly hit by the fact that he may be killing his own relatives. Krishna gives advice to Arjuna who turns out to be Arjuna's charioteer in disguise. Krishna tells Arjuna he must fight in order to fulfill his dharma (caste). Some aspects of Hinduism are more important than the principle of Ahimsa and non-violence, otherwise some duties cannot be completed when strictly taking on Ahimsa as a primary principle. Bhakti is personal devotion to God; this must accord with your Dharma. Therefore if your Dharma is to fight then you cannot follow Ahimsa as well as fight. Moksha is the greatest thing a Hindu must strive for and if Ahimsa is to be ignored to achieve this In the modern day it has saved millions of animals in India and all around the world, and also helps to bring about world peace, so I strongly believe that ahisma is Hinduisms greatest gift to the world, as it preaches the idea of non-violence, like Gandhi did, who was a great follower of ahisma. Ahimsa is a principle, which would last a lifetime, and therefore it has greater value than Gandhi. I conclude by saying that Ahimsa is a great gift since it teaches the use of non-violence instead of disturbing life to solve problems. Shaan Bhatnagar R.S Course Work ...read more.