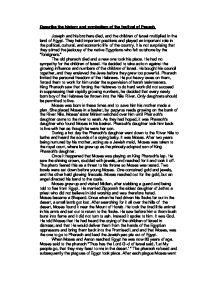 Describe the history and symbolism of the festival of Pesach.

Describe the history and symbolism of the festival of Pesach Joseph and his brothers died, and the children of Israel multiplied in the land of Egypt. They held important positions and played an important role in the political, cultural, and economic life of the country. It is not surprising that they stirred the jealousy of the native Egyptians who felt outshone by the "foreigners." The old pharaoh died and a new one took his place. He had no sympathy for the children of Israel. He decided to take action against the growing influence and numbers of the children of Israel. He bought his council together, and they enslaved the Jews before they grew too powerful. Pharaoh limited the personal freedom of the Hebrews. He put heavy taxes on them, forced them to work for him under the supervision of harsh taskmasters. King Pharaoh saw that forcing the Hebrews to do hard work did not succeed in suppressing their rapidly growing numbers, he decided that every newly born boy of the Hebrews be thrown into the Nile River. Only daughters should be permitted to live. ...read more.

In the middle of the Seder table, three pieces of Matzoh are put in a Matzoh cover. On the Seder table the Seder plate is placed. It holds 6 foods that represent the suffering of the slaves and their quest for freedom. Zeroa is a shankbone or neck of poultry, which is roasted and put on the Seder plate. The zeroa is a reminder of the "mighty arm of God" and it also symbolizes the Paschal lamb offered as the Passover sacrifice in Temple days. Matzah is flat, dry, unleavened bread. When the Israelites left Egypt, they did not have time to wait for their dough to rise. Jews eat matzah, instead of bread, during the week of Passover to remember the exodus of the Jewish slaves from Egypt. Maror are the bitter herbs, such as horseradish root or prepared horseradish, which is placed on the seder plate to remind the Jews of the bitterness of slavery in Egypt. Karpas is a vegetable, like parsley or a potato, which is placed on the Seder plate. Karpas is dipped in salt water to represent tears of the Israelite slaves. ...read more.

"Festivals are the best way to learn about your faith." There are lots of different ways to learn about your faith. And a festival is just one of them. Young people may go to a youth club and be taught by a Rabbi with other people their age to make the experience more enjoyable. Also people could read the Sefer Torah and learn from what is written by prophets. Family can teach about what they know of their religion and pass it onto you. A service a synagogue would teach someone a section of what is written in the Torah in each section and therefore they could find the particular part of the Torah that was useful to them, for example if someone was searching for the exodus they would read the Exodus part of the Torah. There are many different activities run in the synagogue where someone could learn about their religion for example youth groups, play groups for young children. Festivals are also an excellent way of learning about that section of the faith and they involve each person so this may seem a more interesting way of learning. From a Jewish child's point of view a festival such as Pesach with Elijah's cup and the table shaking would be very captivating for a child. ...read more.