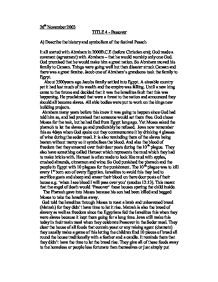 Describe the history and symbolism of the festival Pesach.

26th November 2003 TITLE 4 - Passover A) Describe the history and symbolism of the festival Pesach It all started with Abraham in 2000B.C.E (before Christian era); God made a covenant (agreement) with Abraham - that he would worship only one God. God promised that he would make him a great nation. So Abraham moved his family to Canaan. Things were going well but then disaster struck Canaan and there was a great famine. Jacob one of Abraham's grandsons took the family to Egypt. About 3500years ago Jacobs family settled into Egypt. A sizeable country yet it had lost much of its wealth and the empire was falling. Until a new king came to the throne and decided that it was the Israelites fault that this was happening. He proclaimed that were a threat to the nation and announced they should all become slaves. All able bodies were put to work on the kings new building projects. Abraham many years before this knew it was going to happen since God had told him so, and had promised that someone would set them free. God chose Moses for the task, but he had fled from Egypt long ago. Yet Moses asked the pharaoh to let the slaves go and predictably he refused. Jews now remember this as 4days when God spoke out they commemorate it by drinking 4 glasses of wine during the seder meal. It is also reminding them of the slaves being beaten without mercy so it symbolises the blood. ...read more.

During the 8 days in the spring it may be hard to get time off from work. Since many employers won't let employees have more than 2days off at a time. So it may be difficult in that sense, but they can resolve this by taking an annual holiday set every year. Usually with schools they are quite understanding. Unless the pupil has some important event coming up like their GCSE exams etc. as spring is an important time in the school calendar. So they do have to think about the future aswell as their faith, so the school may not oblige to them having 8days off school, especially if it's a private school where they have to go home for a period of time. The food in particular may be hard to obtain the exact substances that they'd want. They would have to check the labels etc, and you can't tell with modern products. Also getting kosher meat etc. if a Jew lives in somewhere like Norfolk. Which the nearest kosher butcher is in London where there is a substantial amount of Jewish people. During the 8days only the best crockery, pans, cutlery is to be used. Which can cause difficulties and be impractical especially if they have a lot of guests and don't have enough, or just can't afford another set of crockery etc. which I should think that this was mostly the case. Even though they do value their faith highly, sometimes it is impractical to do things. ...read more.

While Christian festivals do have a meaning but not to the extent of other religions. Passover and other Jewish festivals are also something to look forward to and therefore look foreword to learning. Festivals are good for learning, to value and celebrate your faith generally. But this is not the case for everyone. The west has become very materialised governed by money and the media. So I think that faith isn't so important to some people any more. Jews often feel when they celebrate a festival like Shabbat for example it brings them closer to the Jewish community around them also a sense of world wide belonging. Not just now but the past and their ancestry and everything that makes them Jewish. Their future, hoping that there faith would go on through the teachings of the festivals etc. Orthodox Jews see that God is in everyday living not just when they have their festivals such as everyday chores such as washing the dishes to sleeping. This is probably why they have such strict rules to everyday living because they do believe that God is with them all the time. So festivals aren't the only way Jews learn about their faith. The children also go to the synagogues to go to shul, which is a school mainly held on Sundays after the Sabbath. Here they learn about how to read the torah the rites of passages etc. so this is also useful to Jews learning about their faith. So although festivals are very important to Jewish people they also have other ways to commit themselves to their faith. ...read more.