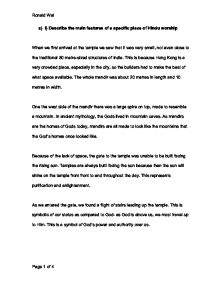 Describe the main features of a specific place of Hindu worship

a) i) Describe the main features of a specific place of Hindu worship When we first arrived at the temple we saw that it was very small, not even close to the traditional 50 metre-sized structures of India. This is because Hong Kong is a very crowded place, especially in the city, so the builders had to make the best of what space available. The whole mandir was about 20 metres in length and 10 metres in width. One the west side of the mandir there was a large spire on top, made to resemble a mountain. In ancient mythology, the Gods lived in mountain caves. As mandirs are the homes of Gods today, mandirs are all made to look like the mountains that the God's homes once looked like. Because of the lack of space, the gate to the temple was unable to be built facing the rising sun. Temples are always built facing the sun because then the sun will shine on the temple from front to end throughout the day. ...read more.

Outside the temple entrance was a shoe rack. Mandirs do not allow shoes inside because of spiritual reasons. Shoes collect the spiritual pollution of the world of Maya, and this pollution is not allowed into the holiness of God's abode. The mandir is the beautiful lotus flower in the pool of dirty water, the one holy and eternal thing in a world of impurity and illusion. For these reasons, no shoes are allowed inside any mandir. Also, taking off the shoes in the spiritually polluted world before entering a pure mandir is very symbolic; it represents purification and enlightenment before being in the presence of God. To the side of the entrance were a water fountain and a notice board. The notice board told worshippers of upcoming events; dinners, pujas, weddings, social events and yoga sessions. Because Hong Kong is such a busy place, many do not have the time for relaxing and socialising. The mandir in Hong Kong realises this, so they encourage worshippers to come and have a breather at the temple, sit back in the peacefulness of the mandir and enjoy the company of friends. ...read more.

To the west side of the room, directly underneath the spire, were the three murtis of Brahma, Vishnu, and Shiva. All three statues were decorated lavishly with colourful clothing and garlands of flowers. In front of them on small platforms sat the tools for puja. There were small pitchers of holy water, flowers, prashad, mala beads, and sticks of incense. In front of Shiva there lay a Lingum, and we observed a Hindu couple pour fresh milk over it, hoping for good fertility. Above us was a bell, used during puja to attract the deity's attention. There was a space between each murti, just enough for worshippers for circumambulation around the deities. The shikhara, made to resemble mountains when looked upon from the outside, was decorated to look like the sky from the inside of the mandir. On the outside, it represented the mountains that the Gods once lived in. On the inside, the shikhara was made to symbolize the sky that surrounds the world, a round dome that covers everything. Although this temple appears a little unorthodox, in truth is a true mandir in every way. Ronald Wai Page 1 of 4 ...read more.