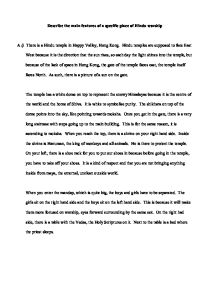 Describe the main features of a specific place of Hindu worship

Describe the main features of a specific place of Hindu worship A i) There is a Hindu temple in Happy Valley, Hong Kong. Hindu temples are supposed to face East West because it is the direction that the sun rises, so each day the light shines into the temple, but because of the lack of space in Hong Kong, the gate of the temple faces east, the temple itself faces North. As such, there is a picture of a sun on the gate. The temple has a white dome on top to represent the snowy Himalayas because it is the centre of the world and the home of Shiva. It is white to symbolise purity. The shikhara on top of the dome points into the sky, like pointing towards moksha. ...read more.

When you enter the mandap, which is quite big, the boys and girls have to be separated. The girls sit on the right hand side and the boys sit on the left hand side. This is because it will make them more focused on worship, eyes forward surrounding by the same sex. On the right had side, there is a table with the Vedas, the Holy Scriptures on it. Next to the table is a bed where the priest sleeps. Near the front of the mandir, there is a very long and big bell hanging down from the ceiling. By ringing the bell, it signifies making peace and to make yourself careful, listen and concentrate on your mind. ...read more.

Shiva has a serpent coiled around his neck to show his powers to control his desires and ego. He also holds a trident to symbolise withdrawing from the pleasures of worldly life. Above the Garbha Griha, you can see the dome. It is coloured blue because it represents holiness and the infinite of God. Outside the temple, there is a notice board with general notices and notices of rites of passages pinned up. There are also small rooms next to the notice board. One of them is a management office for general management with computers and telephones inside. There are guest rooms for people in accommodation, a room, which is the priest's living quarter and another room, which is a Community Centre for activities like yoga, special pujas, holy songs, conversations, language classes and many many more. ...read more.