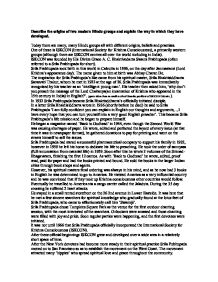 Describe the origins of two modern Hindu groups and explain the way in which they have developed.

Describe the origins of two modern Hindu groups and explain the way in which they have developed. Today there are many, many Hindu groups all with different origins, beliefs and practises. One of these is ISKCON (International Society for Krishna Consciousness), a primarily western groups (although there are ISKCON centres all over the world including in India). ISKCON was founded by His Divine Grace A. C. Bhaktivedanta Swami Prabhupada (often referred to a Srila Prabhupada for short). Srila Prabhupada took birth in this world in Calcutta in 1896, on the day after Janmastami (Lord Krishna's appearance day). The name given to him at birth was Abhay Charan De. The inspiration for Srila Prabhupda's like came from his spiritual master, Srila Bhaktisiddhanta Sarasvati Thakur, whom he met in 1922 at the age of 26. Srila Prabhupada was immediately recognised by his teacher as an 'intelligent young man'. His teacher then asked him, 'why don't you preach the message of the Lord Chaitanya(an incarnation of Krishna who appeared in the 15th century in India) in English?'. (quote taken from an email received from the president of ISKCON Calcutta). In 1932 Srila Prabhupada became Srila Bhaktisddhanta's officially initiated disciple. In a letter Srila Bhaktisiddharta wrote in 1936 (shortly before he died) ...read more.

Soon regular parties were happening, and the first devotees were initiated. It was not until 1966 that Srila Prabhupada officially incorporated the International Society for Krishna Consciousness (ISKCON). After these official beginnings ISKCON grew and developed over a wide area in a relatively short space of time. After the New York devotees had become more steady in their spiritual practice Srila Pubhupada moved on to San Francisco so as to establish the movement on the West Coast. The movement attracted many 'hippies' who spread spiritual love and peace throughout the community. Now there were ISKCON devotees and disciples Srila Prabhupada sent disciples to preach in other parts of the world and establish Krishna conscious centres. They started by spreading their message in London then later they moved into Germany via Berlin then into India while the word was still spreading quickly through the USA. By 1977 Srila Prabhupada had been preaching in the west for 11 years, he had created 108 centres world-wide, written 51 volumes of spiritual literature travelled the world 8 times, initiated 5000 disciples, created the worlds largest vedic literature publisher (The Bhaktivedanta Book Trust) and set up a scientific preaching academy (The Bhaktivedanta Institute). Sadly, he passed on from this world in that same year on November 14th. ...read more.

He declared his religious mission on October 29th 1940. The first Sai Baba (a holy man) had begun the Muslim-Hindu unity and was influenced to teach the Hindu traditions. In 1918, before his death, he proclaimed he would be reborn 8 years later. The second Sai Baba had to continue this mission, turning people toward god, whatever gods name is (Allah to some, Lord to others) they believe that there is really only 'one god the god, he is omnipresent' and 'one religion, the religion of love'. Sai Baba also wanted to turn people to living moral lives and build a world community based on peace. The groups spread quickly (and is continuing to do so today), the ideas were welcomed and acted apon by many. World figures published in 1993 reported there were close to 10 million devotees, 1200 centres in 137 countries. The message spread (carried by Gurus such as Narayana Baba) through Europe but never reached high popularity in America (Gurus still taught religious ideas there and there are reports of growing groups in North America) but a Sathya Sai Newsletter is published by a S.A.I foundation in California. (Information in this section gained from www.religiousmovements.lib.virginia.edu) From these descriptions it is clear that there are many different Hindu groups today, all of which are different in many ways, they have different histories and different beliefs. ...read more.