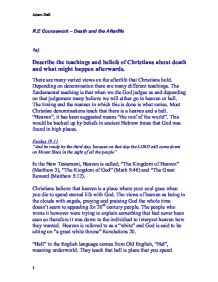 Describe the teachings and beliefs of Christians about death and what might happen afterwards.

R.E Coursework - Death and the Afterlife 1a) Describe the teachings and beliefs of Christians about death and what might happen afterwards. There are many varied views on the afterlife that Christians hold. Depending on denomination there are many different teachings. The fundamental teaching is that when we die God judges us and depending on that judgement many believe we will either go to heaven or hell. The timing and the manner in which this is done is what varies. Most Christian denominations teach that there is a heaven and a hell. "Heaven", it has been suggested means "the roof of the world". This would be backed up by beliefs in ancient Hebrew times that God was found in high places. Exodus 19:11 "And be ready by the third day, because on that day the LORD will come down on Mount Sinai in the sight of all the people" In the New Testament, Heaven is called; "The Kingdom of Heaven" (Matthew 3), "The Kingdom of God" (Mark 9:46) and "The Great Reward (Matthew 5:12). Christians believe that heaven is a place where your soul goes when you die to spend eternal life with God. The views of heaven as being in the clouds with angels, praying and praising God the whole time doesn't seem to appealing for 20th century people. The people who wrote it however were trying to explain something that had never been seen so therefore it was down to the individual to interpret heaven how they wanted. ...read more.

However, according to some Christians, behaving as the Bible teaches or as Jesus commands is not sufficient to ensure an after life in heaven without a true faith in Jesus Christ. In James 2:14 it " says that if people say they have faith but do nothing their faith is worth nothing..." James 2 ' ... [Abraham's] faith was made perfect by what he did. So it is faith in Jesus Christ - and therefore inevitably in an after life as He promised - that affects a Christian's behaviour.' Christians teach that caring and providing for the needy is an obligation instead of an option. This is seen in Romans 13:9 where it says; "Love your neighbour as yourself." To Christians this is supposed to be one of the most important teachings because Jesus sees it as being the one rule which sums up the other 10 commandments. This would affect a Christian's life because they see it as another way of saying help the less fortunate as you would like to be treated; with love and care. There is a point of view that Christian faith is an 'insurance policy' for an afterlife. Some cynics think that it is possible to live a godless life and then make a deathbed confession, make yourself right with God and then gain eternal life in heaven. This is contradicted by all the teaching in the New Testament and the words of Jesus Himself: However, this does not rule out the possibility of someone hearing the ...read more.

You are not your own Christians believe that you should live your life according to religious teachings. A few of these include the 10 commandments, "Love your neighbour as yourself". There are also parables like the good Samaritan (Luke 10:25-37). All of these command Christians to live their lives in a respectable and loving way. Some Christians regard life as a time to serve and Heaven as a time to enjoy. Based on this thought, some Christians would therefore strongly disagree with the statement. They believe that if you live a righteous life your reward will be in heaven. Matthew 5:10 Blessed are those who are persecuted because of righteousness, for theirs is the kingdom of heaven. Christians believe that part of living as a Christian, is to be as much like Jesus as possible, holy and sinless. They see living for God as being a great source of enjoyment. Christians believe that God called us to live for him and living for him means you have to follow Jesus' example. For an atheist this quote would be completely true. They would see the afterlife, as non-existent so therefore what happens when we die will not matter. Apart from personal morals and the law, atheists do not have any rules upon which they live their life. Sex before marriage, drugs and alcohol means nothing to them apart from the consequences that may follow. They are able to live a fun life believing that it will not affect an afterlife. R. ...read more.