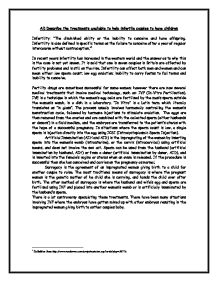 Ai) Describe the treatments available to help infertile couples to have children Infertility: "The diminished ability or the inability to conceive and have offspring. Infertility is also defined in specific terms as the failure to conceive after a year of regular intercourse without contraception."1 In recent years infertility has increased in the western world and the answer as to why this is the case is not yet known. It is said that one in seven couples in Britain are affected by fertility problems and is still on the rise. Infertility can affect both men and women and can mean either: low sperm count; low egg ovulation; inability to carry foetus to full terms and inability to conceive. Fertility drugs are sometimes successful for some women; however there are now several medical treatments that involve medical technology, such as: IVF (In-Vitro Fertilisation). IVE is a technique in which the women's egg cells are fertilised by the man's sperm outside the woman's womb, in a dish in a laboratory. "In Vitro" is a Latin term which literally translates as "in glass". The process usually involves hormonally controlling the women's menstruation cycle, followed by hormone injections to stimulate ovulation. The eggs are then removed from the ovaries and are combined with the collected sperm (either husbands or donors') in a fluid medium, and the embryos are transferred to the patient's uterus with the hope of a successful pregnancy. In situations where the sperm count is low, a single sperm is injection directly into the egg using ICSI (Intracyctoplasmic Sperm Injection). Artificial Insemination (AIH and AID) is the impregnating of the women by inserting sperm into the women's womb (intrauterine), or the cervix (intracervical) ...read more.

There is now a wide range of organs that can successfully be transplanted, however, organs must be compatible and drugs usually have to be used to prevent the donated organ from being rejected by the host. There are two types: organs from a dead person and organs from a living person. Other people disagree with it because there are concerns about when a donor is pronounced dead. I will be describing two different religious beliefs: Christianity and Muslims' views, as well as non-religious views. There are many arguments in favour of transplant surgery because it is a very effective and proven method of curing life-threatening diseases and gives life and hope. It uses organs that would otherwise be buried or burned and can improve peoples lives, for example cornea grafting which gives sight to the blind. However there are also many arguments against transplant surgery. Transplant surgery causes debates and controversy because it raises the moral problem of when a person is considered dead. Such things as heart transplants require the heart to be removed before it had stopped beating and although contemporary medical science have leaned towards "brain-dead" as the definition of death, many people believe that the heart is what defines the person. It also raises the emotional and moral problem whether surgeons who are desperate for a transplant for another patient will work to the best of their ability to save the life of a potential donor. There is also the question of xenotransplantation - the use of animals for transplantation and whether animals such as pigs, chimpanzee etc be bred to provide life-saving human organs. The majority of Christians agree with transplant surgery and carry donor cards, but would object to rich people or surgeons in the developed world paying for organs from the poor. ...read more.

Liberal Protestants agree with Catholics but add that it should not be used to create perfect humans or clones, and support the use of embryos as they have potential for life but are not alive. However some Christians completely disagree with Genetic Engineering altogether and believe that God created our genetic make and that altering it would be playing God which is a sin. They also believe that earth shouldn't be made perfect because heaven is perfect and that we should not try to create heaven on earth. Similarly Traditional Muslims are opposed to all genetic research because they believe that God made us the way we are and to alter that would be to act as God, which is the unforgivable sin of 'shirk'. Shirk is the worst possible sin, and includes turning away from Islam, and playing God etc. In some countries it is worth the death penalty. They believe that embryo research is the same as abortion, and abortion is banned in Islam because it is seen as murder, and like Catholics they agree that life begins at conception. However unlike Traditional Muslims, Modern Muslims agree with Liberal Protestants and believe that genetic engineering is a good to cure diseases, but should not be used to create perfect human beings. They also support the use of embryos under 14 days because they are not human yet, and that teachings in the Qur'an and the Hadith say that Muslims should heal people. There are many moral set backs and many beliefs whether it should be allowed or not, but there is no doubt that mankind has stumbled into a great discovery which has divided the nation, questioning the ability to alter our very existence. 1 Definition from http://www.medterms.com/script/main/art.asp?articlekey=3977z ?? ?? ?? ?? ...read more.