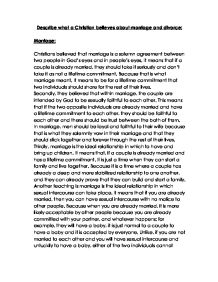 Christians believed that marriage is a solemn agreement between two people in God’s eyes and in people’s eyes. It means that if a couple is already married, they should take it seriously and don’t take it as not a lifetime commitment. Because that is what marriage meant. It means to be for a lifetime commitment that two individuals should share for the rest of their lives.

Thirdly, marriage is the ideal relationship in which to have and bring up children. It means that, if a couple is already married and has a lifetime commitment. It is just a time when they can start a family and live together. Because it is a time where a couple has already a deep and more stabilized relationship to one another, and they can already prove that they can build and start a family.

Marriage is a life-long commitment and every individual should be serious before undergoing on this situation. It is also a sacred and on important sacrament in becoming a full-human. So, people cannot just play with marriage and break it once they have enough of it.

Every human being is a gift from God, and everyone is meant for one another. That is why, before marriage every individual should accept each other not just in their physical characteristics but, also in their emotional characteristics.

Catholic Christians often called it as ‘Holy Sacrament of Matrimony