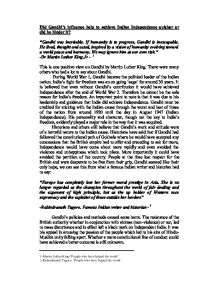 Did Gandhi's influence help to achieve Indian Independence quicker or did he hinder it?

Did Gandhi's influence help to achieve Indian Independence quicker or did he hinder it? "Gandhi was inevitable. If humanity is to progress, Gandhi is inescapable. He lived, thought and acted, inspired by a vision of humanity evolving toward a world peace and harmony. We may ignore him at our own risk." -Dr Martin Luther King.Jr - 1 This is one positive view on Gandhi by Martin Luther King. There were many others who had a lot to say about Gandhi. During World War 1, Gandhi became the political leader of the Indian nation. India's fight for freedom was an on going 'saga' for around 30 years. It is believed that even without Gandhi's contribution it would have achieved Independence after the end of World War 2. Therefore he cannot be the sole reason for India's freedom. An important point to note is that it was due to his leadership and guidance that India did achieve Independence. Gandhi must be credited for sticking with the Indian cause through the worst and best of times of the nation from around 1920 until the day in August 1947 (Indian Independence). His personality and character, though not the key to India's freedom, evidently played a major role in the way that it was acquired. Historians and others still believe that Gandhi's work and attitude were of a harmful nature to the Indian cause. Historians have said that if Gandhi had followed the constitutional path of Gokhale where he would have accepted any concessions that the British empire had to offer and preceding to ask for more, Independence would have come about more rapidly and even avoided the violence and unhappiness which took place. ...read more.

Gandhi's aims were clear to all. His goal for the people was Independence which is why many were proud of him, another historian said: "Between the two world wars, at the heyday of colonialism, force reigned supreme. It had a suggestive power; and it was natural for the weaker to lie down before the stronger. Then came Gandhi chasing out of his country, almost single-handed, the greatest military power on earth. He taught the world that there are higher things then force, higher even then life itself; he proved that force had lost its suggestive power." -Albert Szent-Gyorgyi, Nobel-Laureate Historian-5 Gandhi continued to oppose division, with a growing sense of his own powerlessness in the situation, until finally he had to discard the idea of Hindu-Muslim unity. This all tragically ended in partition and the killing of many thousands. This was the tragic irony of Gandhi's career. It may have been unknown to him but his character and personality affected events in a grave manner. Gandhi believed he was meant to carry the message of Ahimsa (non-violence) to one and all, but on the road to Independence the world was given a show of violence to such an extent that had not been seen before. All his teachings seem to have been in vain. This leads us to the conclusion that Gandhi's influence was not helpful. Gandhi realised that the struggle against the British had been unproductive. Even with all the Satyagraha campaigns and Hartals (strikes) nothing had been achieved. ...read more.

He himself would have denied this; the dominant purpose of his life was a religious one, and he was brought to politics by religion. We have covered all the facts and all the important points, from this we can gather that Gandhi was a man who may have not been liked by everyone but was loved by many. Gandhi played an integral role in reliving India from the British grip but along this road he encountered many hardships which the country also faced with many people perishing. So the question of whether he brought the arrival of Independence quicker or whether he hindered the process can be seen from either side of the argument. Many historians say he was the cause of Independence and the country's saviour whilst many others such as the Muslim leader Jinnah believe Gandhi's tactics only brought chaos and further death. I personally believe that Gandhi did help to achieve Independence but his methods were very drastic and the question remains; was the cost of achieving Independence the death of a vast majority of the country? The original question remains unanswered because both the fact that he helped achieve Independence and that he hindered it in some way are both true. The facts tell the final story and the answer to the question can only be found by each individual depending on their views of Gandhi. Ghandi did make a great contribution, the establishment hated him simply because he was a challenge to their power and authority. ...read more.