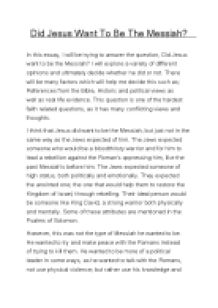 Did Jesus Want to be The Messiah?

﻿Did Jesus Want To Be The Messiah? In this essay, I will be trying to answer the question, Did Jesus want to be the Messiah? I will explore a variety of different opinions and ultimately decide whether he did or not. There will be many factors which will help me decide this such as; References from the Bible, Historic and political views as well as real life evidence. This question is one of the hardest faith related questions, as it has many conflicting views and thoughts. I think that Jesus did want to be the Messiah, but just not in the same way as the Jews expected of him. The Jews expected someone who would be a bloodthirsty warrior and for him to lead a rebellion against the Roman's oppressing him, like the past Messiah's before him. The Jews expected someone of high status, both politically and emotionally. They expected the anointed one; the one that would help them to restore the Kingdom of Israel, through rebelling. Their ideal person would be someone like King David, a strong warrior both physically and mentally. Some of these attributes are mentioned in the Psalms of Solomon. ...read more.

He was informing them that he would be rejected and oppressed by the people of high status, and he would be killed and be resurrected again. Peter was astounded by this, and rebuked Jesus, "And Peter took him and began to rebuke him." He just simply couldn't take in all of this new knowledge at once because he had based his life on this. Peter?s "rebuke" of Jesus was due to his still incomplete understanding of the true mission of the Messiah. Peter could not come to terms with the idea of the suffering Messiah with the current Jewish notions and thoughts of him. In conclusion, I think that Jesus did want to be the Messiah, just not how he was expected to be. He was a peace loving person, and very strong willed. Unless he had a strong passion to be the Messiah, there would be no reason for him to go through so much pain and suffering in his life time as the Messiah, and to have such a painful slow death. There are many things that are still left up to people's own thoughts/interpretations and they can decide themselves whether or not they agree, but I think that he did want to be the Messiah. ...read more.