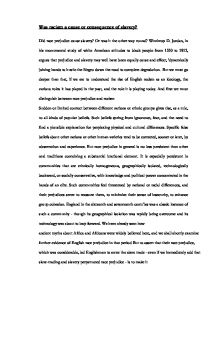 Did race prejudice cause slavery? Or was it the other way round? Winthrop D. Jordan, in his monumental study of white American

Was racism a cause or consequence of slavery? Did race prejudice cause slavery? Or was it the other way round? Winthrop D. Jordan, in his monumental study of white American attitudes to black people from 1550 to 1812, argues that prejudice and slavery may well have been equally cause and effect, 'dynamically joining hands to hustle the Negro down the road to complete degradation. But we must go deeper than that, if we are to understand the rise of English racism as an ideology, the various roles it has played in the past, and the role it is playing today. And first we must distinguish between race prejudice and racism Sudden or limited contact between different nations or ethnic groups gives rise, as a rule, to all kinds of popular beliefs. Such beliefs spring from ignorance, fear, and the need to find a plausible explanation for perplexing physical and cultural differences. Specific false beliefs about other nations or other human varieties tend to be corrected, sooner or later, by observation and experience. But race prejudice in general is no less persistent than other oral traditions containing a substantial irrational element. It is especially persistent in communities that are ethnically homogeneous, geographically isolated, technologically backward, or socially conservative, with knowledge and political power concentrated in the hands of an elite. ...read more.

White people were taught that this nakedness reflected promiscuity in the black woman. The white men used this false notion of promiscuity as justification to rape these women without any feelings of guilt. according to the text of Brenda E. Stevenson, Gender Convention, Ideals, and Identity Among Antebellum Virginia Slave Women (p.171). Whites saw black women as non-human, but they still wanted their body and the pleasure of having sex with them. In many cases the black women were forced to concede because if they didn't obey, they ran the risk of being beat to death. Still many preferred to resist rape and take their chances. Mary Prince, a West Indian slave states: " He had an ugly fashion of stripping himself quite naked and ordering me then to wash him in a tub of water. This was worse to me than the licks." 1 Also, the image of the female slave as a wife and mother was viewed negatively. The black women slave could not be a good mother since she couldn't take care of her children and give them all they needed. She is not there for her husband since she is always in labour. The truth is that in most cases the slave women had to take more care of her master's kid than her own. ...read more.

Many passages from The Classic Slave Narratives confirm that white masters constantly demonstrated their superiority though senseless beatings. Isn't it ironic that the whites were the ones that viewed themselves as civilized, educated good Christians? More like devils in this writers opinion. This passage of The History of Mary Prince (p.265), show all the horror and the freeness of masters act: "He came to me, and without any more ado, stooped down, and taking off his heavy boot, he struck me such a severe blow in the small of my back, that I shrieked with agony, and thought I was killed; and feel a weakness in that part to this day (...) I cannot remember how many licks he gave me then, but he beat me till I was unable to stand, and till he himself was weary."4 In conclusion we can see how through the use of propaganda (i.e. fabrication of black race, identity and culture) white Europeans convinced themselves (and others) that Blacks were less than human. They utilized this falsified belief system to enslave black Africans for their own selfish economic gain. History has proven that the white Europeans were the real savages. It is true even today in many parts of the world that blacks suffer discrimination based on the false stereotypes created during black slavery in the Caribbean and southern United States. ...read more.