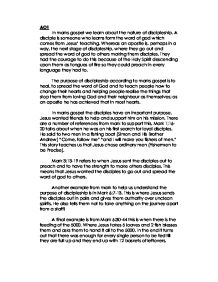 In marks gospel we learn about the nature of discipleship. A disciple is someone who learns form the word of god which comes from Jesus’ teaching. Whereas an apostle is, perhaps in a way, the next stage of discipleship, where they go out and spread the word of god to others making them disciples. They had the courage to do this because of the Holy Spirit descending upon them as tongues of fire so they could preach in every language they had to.

The purpose of discipleship according to marks gospel is to heal, to spread the word of God and to teach people how to change their hearts and helping people realise the things that stop them from loving God and their neighbour as themselves; as an apostle he has achieved that in most hearts.

In marks gospel the disciples have an important purpose. Jesus wanted friends to help and support him on his mission. There are a number of references from mark to support this. Mark 1:16-20 talks about when he was on his first search for loyal disciples. He said to two men in a fishing boat (Simon and His Brother Andrew) “Come, follow me” “and I will make you fishers of men.” This story teaches us that Jesus chose ordinary men (Fishermen to be Precise).

Mark 3:13-19 refers to when Jesus sent the disciples out to preach and to have the strength to make others disciples. This means that Jesus wanted the disciples to go out and spread the word of god to others.

Another example from mark to help us understand the purpose of discipleship is in Mark 6:7-13. This is where Jesus sends the disciples out in pairs and gives them authority over unclean spirits. He also tells them not to take anything on the journey apart from a staff!

A final example is from Mark 6:30-44 this is when there is the feeding of the 5000. Where Jesus takes 5 loaves and 2 fish blesses them and asks them to hand it all to the 5000. In the end it turns out that there was enough for every single person to be fed till they are full up and they end up with 12 baskets of leftovers.

Jesus chose a variety of different people to be his disciples. For example he chose four fishermen as his first four disciples! (Mark 1:16-20) he also chose a tax collector (Levi the son of Alpheus) this shows Christians today that Jesus chose ordinary people not big people that were ‘the best’!

Mark is very clear about the costs and demands of discipleship. Disciples have to give up everything and show total love to God. For example in Mark 12:41-44 it shows a widow putting all she had in the Treasury and Jesus Said that she had put more in than all the Others who put in what they could spare!

The demands are clear from Mark 8:34-38. Where Jesus says; "If anyone would come after me, he must deny himself and take up his cross and follow me for whoever wants to save his life will lose it, but whoever loses his life for me and for the gospel will save it. What good is it for a man to gain the whole world, yet forfeit his soul? Or what can a man give in exchange for his soul? If anyone is ashamed of me and my words in this adulterous and sinful generation, the Son of Man will be ashamed of him when he comes in his Father's glory with the holy angels." The general consensus of what Jesus is saying is that all who wish to follow him in the path of glory must give up everything he/she has.

Further examples from Mark include 6:7-10: where Jesus tells his disciples to, "Take nothing for the journey except a staff. no bread, no bag, no money in your belts. Wear sandals but not an extra tunic. Whenever you enter a house, stay there until you leave that town.”

This means that Jesus was basically saying, “Don't think you need a lot of extra equipment for this. You are the equipment. No special appeals for funds. Keep it simple.

No posh inns. Get a modest place and be content there until you leave.”

Even though there are many costs and demands to discipleship, there are also a lot of rewards. Mark makes this clear in Mark 10:28-31 where Peter said to Jesus, "We have left everything to follow you!"

"I tell you the truth," Jesus replied, "no one who has left home or brothers or sisters or mother or father or children or fields for me and the gospel will fail to receive a hundred times as much in this present age (homes, brothers, sisters, mothers, children and fields and with them, persecutions) and in the age to come, eternal life. But many who are first will be last, and the last first."

This shows us the rewards of discipleship because Jesus was enhancing the fact that they would get anything and everything they want in heaven as they have left everything behind.

The disciples found discipleship difficult to understand. They sometimes misunderstood what Jesus meant. For example, in Mark 2:13-17, Once again Jesus went out beside the lake. A large crowd came to him, and he began to teach them. As he walked along, he saw Levi son of Alphaeus sitting at the tax collector's booth. "Follow me," Jesus told him, and Levi got up and followed him.

On hearing this, Jesus said to them, "It is not the healthy who need a doctor, but the sick. I have not come to call the righteous, but sinners."

The disciples did not understand this because they thought that Jesus was a sinless man and there he was eating with so called sinners? What they didn’t see was that Jesus had come to earth to heal sinners and cure the lame. Not applaud the perfect and righteous.

Discipleship was not something that was easy. The disciples were asked to give up a lot to show their love for God. For example, in Luke 14:33 Jesus says, “in the same way, any of you who does not give up everything he has, cannot be my disciple.”

The effects that Jesus’ teaching about discipleship has on Christians today when it comes to spreading Jesus’ message are as follows. The 10 commandments! Jesus referred to these quite often. I mean yes, maybe not everyone follows the 10 commandments, but at least the people that know about them acknowledge them and respect them. Also about giving up all that we have to follow God. I don’t think many people today would give up all they had to follow God; reason being that we are all selfish. I mean, at least we know that we have to, but; at the same time, nobody in today’s world would give up their possessions.

The effects that Jesus’ teaching about what type of people are chosen to be disciples has on the lives of Christians today are that you don’t have to be flash and fancy to impress Jesus or God. What they focus on is a persons faith but also lack of faith! If there was supreme lack of faith, Jesus would try and help that person to be a good Samaritan.

Jesus’ teaching about the costs and demands of discipleship affects the lives of Christians today by showing that they would have to give up everything to not only be a disciple but also to gain entry into the kingdom of God! This is quite a dawning thought to some as not a lot of people would do that for God. Also to leave all of their family including wife/husband and children! I don’t think that people nowadays would be in this frame of mind unless their faith was very strong!

Jesus’ teaching about the rewards of discipleship affect the lives of Christians today by indulging them with the reward of 100 times as much as what they want. And anything that they want as well! People would think that this would be worth giving up everything for! But the 1 thing that usually holds them back is that there might not be a God and what if it’s just made up?

Mother Teresa was a famous Christian who dedicated her life to helping others and she was made a saint. She is a great inspiration to others and if more people were like her then the world would be a better place!

The arguments that people would put down as to why Children cannot be disciples and Christians are that:

The arguments that people would put down as to why children can be disciples and Christians are that:

I believe that the true Christian view is that Children can be disciples and Christians. My reasons are that most Christians are self conscious about children so thy want to protect them. Also children have to make their own choices in life so if they want to become a disciple or Christian then nobody should stop them as it is their choice!