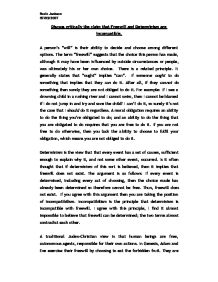 Discuss critically the claim that Freewill and Determinism are incompatible

Discuss critically the claim that Freewill and Determinism are incompatible. A person's "will" is their ability to decide and choose among different options. The term "freewill" suggests that the choice this person has made, although it may have been influenced by outside circumstances or people, was ultimately his or her own choice. There is a related principle. It generally states that "ought" implies "can". If someone ought to do something that implies that they can do it. After all, if they cannot do something then surely they are not obliged to do it. For example: If I see a drowning child in a rushing river and I cannot swim, then I cannot be blamed if I do not jump in and try and save the child? I can't do it, so surely it's not the case that I should do it regardless. A moral obligation requires an ability to do the thing you're obligated to do; and an ability to do the thing that you are obligated to do requires that you are free to do it. ...read more.

The idea suggests that salvation cannot be achieved through actions on this earth, but through God's grace alone. As regards to the ethical ramifications of such a view, the notion that human beings are not autonomous moral agents raises a number of problems. If we aren't free, how can we be morally responsible for our actions, and how can we be punished for those actions; and if God has already decided who goes to heaven and who goes to hell, do our actions on earth count for anything at all? Hard Determinism has some ethical similarity to the protestant "predestination". It maintains that all of our actions have a prior cause. Humans aren't free to act, but our actions are determined by a complex set of previous causes. It is as if we were trains, running along a fixed track. Hard determinism has a number of profound consequences. It puts into doubt our hopes for the future and how we consider the morality of others. Determinism means that we cannot praise people for being good, or blame others for being bad. ...read more.