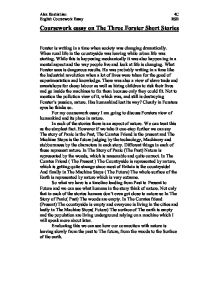 Discuss Forsters view of humankind and its place in nature.

Coursework essay on The Three Forster Short Stories Forster is writing in a time when society was changing dramatically. When rural life in the countryside was leaving while urban life was starting. While this is happening mechanically it was also happening in a mental aspect and the way people live and look at life is changing. What Forster sees is dangerous results. He was probably writing in a time like the Industrial revolution when a lot of lives were taken for the good of experimentation and knowledge. There was also a view of slave trade and sweatshops for cheap labour as well as hiring children to risk their lives and go inside the machines to fix them because only they could fit. Not to mention the pollution view of it, which was, and still is destroying Forster's passion, nature. Has humankind lost its way? Clearly in Forsters eyes he thinks so. For my coursework essay I am going to discuss Forsters view of humankind and its place in nature. In each of the stories there is an aspect of nature. We can treat this as the simplest fact. However if we take it one-step further we can say The story of Panic is the Past, The Curates Friend is the present and The Machine Stops is the future judging by the technology, Machinery and stubbornness by the characters in each story. Different things in each of these represent nature. ...read more.

His Dangers and views of the consequences of not being in touch with nature can be translated to be a bit extreme but nevertheless show his determination and effort to show us what humankind is really like as well as his character of the subject, such as when Eustace gets sent to his room after he is in touch with nature he cry's and complains it is too small as well as Genaro the waiter which Eustace shares his touchability with warns the adults that if they keep him in the room he will die which almost happened when they both jumped out of the window while Genaro got killed but Eustace got saved by an olive tree which is trying to show how nature saved Eustace's life. As well as in The Machine Stops when the Machine breaks and Vashti and her son Kuno both get killed when the machine blows up. Knowing this we will now look at the effects on the people getting in touch with nature. As we already know in Each story someone changes their attitude towards nature from negative to positive. In a Story of Panic Eustace starts of by being a boring boy with no talents or major interests. He cant swim is not academic at school and is certainly not good at sports. He then changes his attitude after coming into contact with Pan and is then very jumpy, happy, hyper and has likes lots of physical activity. ...read more.

We can see how Forster dislikes Christianity from Forster's love of mythology and especially mythological creatures such as Pan the Faun. Unfortunately Christians and their beliefs dislike Paganism and their beliefs so therefore Forster dislikes Christianity. Such as In The Curates Friend, The Christian Curate came in contact with The faun and the Faun changed him completely. This shows that Forster thinks that Christian beliefs should change and how he thinks that religion is going in the other way of nature, which may seem strange since religion backs up how The world was formed. As we can see from this essay Forster is initiating a warning to humankind. We can see that Forster wants us to be more in contact with nature in order to mature our souls and spirits. He sees that people are just living for the sake of living having no purpose in life and is trying to threaten us or give us a warning that danger lies ahead if we carry on this way, such as The ending of The Machine Stops when Vashti and her son Kuno try to reach the surface of the Earth but don't make it in time because the machine breaks and blows up and so they end up dieing by the thing in which the lived and relied on or so many years. I can safely tell you that the most important message Forster is trying to tell us for these three stories and possibly the rest of his nature based story is "Technology will fail us, and Nature wont." Alex Keshishian 4C English Coursework Essay RSB ...read more.