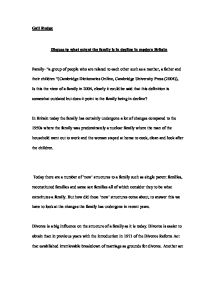 Discuss to what extent the family is in decline in modern Britain.

Gail Rudge Discuss to what extent the family is in decline in modern Britain Family- "a group of people who are related to each other such as a mother, a father and their children "(Cambridge Dictionaries Online, Cambridge University Press (2004)), Is this the view of a family in 2004, clearly it could be said that this definition is somewhat outdated but does it point to the family being in decline? In Britain today the family has certainly undergone a lot of changes compared to the 1950s where the family was predominately a nuclear family where the man of the household went out to work and the woman stayed at home to cook, clean and look after the children. Today there are a number of 'new' structures to a family such as single parent families, reconstituted families and same sex families all of which consider they to be what constitutes a family. But how did these 'new' structures come about, to answer this we have to look at the changes the family has undergone in recent years. Divorce is a big influence on the structure of a family as it is today. ...read more.

The increase in divorce can also be looked at from the view that more and more people are looking for the 'perfect' marriage and rather than stay in an 'empty shell' one they will divorce. Statistics also show that in a survey of people under 35 (who had divorced between 1983 and 1986) 40% of them had remarried within five years. (Family Class Handout (21.10.04:2). These statistics could be used therefore to show that marriage itself is still popular and surely the basis for the family? Unfortunately although divorced people seem to be remarrying the actual number of marriages has dropped. Reasons for this could be the increase in cohabiting couples, the expense involved, creative singlehood, the increase in rights for 'common law' wives and that when considering marriage religion isn't as paramount anymore. The New Rights view on the falling marriage rate is that cohabitating couples are a threat to the sanctity of marriage and the arrangement lacks commitment. Robert Chester (1985:1) argues though, "We are not witnessing a mass rejection of marriage. ...read more.

(Class Handout (08.10.04:5)). It has also been argued, "it is often preferable for a child to live with one caring parent than with parents who are in conflict and who may scapegoat the child"(Phoenix (1993:5) and Cashmore (1995:5)). It is also true to say that despite the media there are far fewer teenage single parents than there were in the 1980s and that most single mothers go on to marry or remarry and the likelihood of a reconstituted family forming is very likely. It is fair to say that the family has undergone some major and radical changes over the years but can it be said that these changes are pointing towards a decline in the family? The definition of 'a family' is outdated so isn't it also true to say that rather than the family being in decline it has actually just become more diverse and more individualist. We all have our own views of how we see a family so couldn't it be that the family has its own structure dependant on who you are and as long as it functions to the best of its ability, it is about change 'with the times' rather than decline. ...read more.