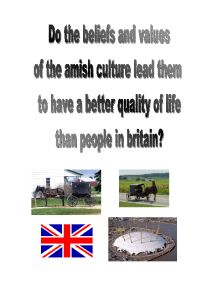 Do the beliefs and values of the amish culture lead them to have a better quality of life than people in britain?

Introduction Within this assessment I will be answering the Amish culture and beliefs Question. I will be explaining the culture of the Amish and there beliefs leading them to react the way they do and the English culture and there beliefs leading them to act in a multicultural way. Later on I will be talking about who has the better way of life. Amish history Until 1517 all Christians were Roman Catholics then in 1517, Martin Luther led the protestant reformation against the corruption of the Roman Catholic Church. This was first break in Christianity. Then in 1525 the new protestant faith was split because some Christians didn't believe people should be baptised until they were adults. They were called Anabaptists, later still the Amish (named after Jacob Amman) ...read more.

Some of the men's jobs are farming, building, Elders run the community and men take the leading courting the women's jobs are house work, Quilting, kirche which means church and kinder which means children and kuche means cooking. They do this because they believe in the creation story (Genesis) where Eve is created from Adam's rib and women would mean wombed man. The Amish don't have the technology we have now and they don't use cars they use horse and cart, with modern indicators and lights (due to US legal requirements) they also have water power, hurricane lamps, basic carpentry for building, basic farming methods, horse drawn farm equipment and no telephones and electrical goods ect. They do this because they believe the bible instructs withdrawal from the "sinful" "English/Yankees" so, because of separation from modern USA, technology has not moved on greatly from their arrival in USA in 1690's. ...read more.