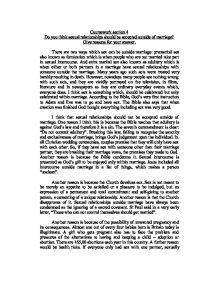 Do you think sexual relationships should be accepted outside of marriage? Give reasons for your answer.

Coursework section 4 Do you think sexual relationships should be accepted outside of marriage? Give reasons for your answer. There are two ways which sex can be outside marriage: premarital sex also known as fornication which is when people who are not married take part in sexual intercourse. And extra marital sex also known as adultery which is when either or both partners in a marriage have sexual relationships with someone outside the marriage. Many years ago such acts were treated very harshly resulting in death. However, nowadays many people see nothing wrong with such acts, and they are vividly portrayed on the television, in films, literature and in newspapers as they are ordinary everyday events which, everyone does. I think sex is something which, should be celebrated but only celebrated within marriage. ...read more.

Another reason is because the Bible condemns it. Sexual intercourse is presented as God's gift to be enjoyed only within marriage. Jesus included all intercourse outside marriage in a list of things, which makes a person "unclean". Another reason is because the Church devalues sex. Sex is not meant to be merely an appetite to be satisfied or a pleasure to be indulged, but an expression of a permanent and total commitment and self-giving to another person, a cementing of a unique relationship. Another reason is that the Church disapproves of it. Sexual relationships outside marriage have always been condemned as the ignoring of a sacred covenant. St Paul said in a very early letter, "Those who can not control themselves should get married". ...read more.

If this is the case in my opinion I think sexual relationships outside of marriage should be acceptable because the man and women in a relationship are only having sex with each other and no one else. A further reason is that many people do not get married as they feel God does not require them to and therefore as sex is an emotional and psychological need they will need to have sex even though it will be having sex outside marriage. Another reason is that many people think that when you have sex it makes an adult out of a person. Many young people think this but this is not true. It's just an excuse to have under age sex. Overall, as many of the reasons accepting sexual relationships outside marriage are excuses rather than reasons I still think that sexual relationships outside marriage should not be accepted. ...read more.