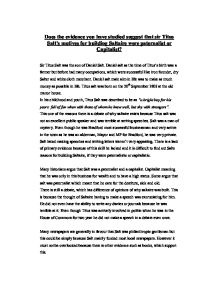 Does the evidence you have studied suggest that sir Titus Salt's motives for building Saltaire were paternalist or Capitalist?

Does the evidence you have studied suggest that sir Titus Salt's motives for building Saltaire were paternalist or Capitalist? Sir Titus Salt was the son of Daniel Salt. Daniel salt as the time of Titus's birth was a farmer but before had many occupations, which were successful like iron founder, dry Salter and white cloth merchant. Daniel salt main aim in life was to make as much money as possible in life. Titus salt was born on the 20th September 1803 at the old manor house. In his childhood and youth, Titus Salt was described to be as "a bright boy for his years: full of fun when with those of whom he knew well, but shy with strangers". This one of the reasons there is a debate of why saltaire exists because Titus salt was not an excellent public speaker and was terrible at writing speeches. Salt was a man of mystery. Even though he was Bradford most successful businessman and very active in the town as he was an alderman, Mayor and MP for Bradford, he was very private. Salt hated making speeches and writing letters weren't very appealing. There is a lack of primary evidence because of this skill he lacked and it is difficult to find out Salts reasons for building Saltaire, if they were paternalistic or capitalistic. ...read more.

Maybe he wanted be with the competition and build better factories than the rest. Therefore Salt built Saltaire in order to ensure he remained in competition with other businesses. Salt was also a capitalist because it is believed that Salt would wake up early in the morning to go down to the factory before 7am so he could make an extra �1,00 pounds a day. This shows that he had an urge to make money and therefore conformed to get more money. Just before Saltaire had been built, a manufacturer from Halifax called Edward Ackroyd had quoted that he had to "protect himself from a sudden withdrawal of labour". This meant that he needed to keep the workforce content meaning not to let the workforce get out of control. This is why probably Salt made a village with brilliant sewage system and all together a fantastic village, which was clean and healthy to please the workers so they do not revolt and keep the workers under control. He did this because he feared that there maybe strikes. When salt started his work on his first, he could have consulted the best architects in the world to construct his mill but he choose the local Bradford architects Lockwood and Mawson. ...read more.

Titus had enough money already, even if he didn't make a model village. He didn't need it; maybe he thought that this village would be something to remember him by when he dies. Because he built a village that was clean and healthy people would remember him. If he were just another factory owner in Bradford, not a lot of people would have been sorry that he died. In conclusion, I am not entirely sure what Salts motives were as there is no substantial to confirm whether he was a paternalist more than a capitalist and other way round. Titus Salt could be called an enlightened capitalist, which would mean he was a mixture of both. He must have realised that keeping all the profits is not really good idea. He was morally concerned about the rights of his workers and his responsibility as employer. He saw there were many benefits for him building Saltaire both for him and his workers. The workers would feel satisfied while Salt making secure profits. It can be believed that Salts religious beliefs also played an important factor in him being a paternalist and him being a wealthy man at the same time. Word Count: 2194 ...read more.