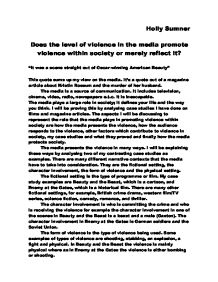 Does the level of violence in the media promote violence within society or merely reflect it?

Holly Sumner Does the level of violence in the media promote violence within society or merely reflect it? "It was a scene straight out of Oscar-winning American Beauty" This quote sums up my view on the media. It's a quote out of a magazine article about Kristin Rossum and the murder of her husband. The media is a source of communication. It includes television, cinema, video, radio, newspapers e.t.c. It is inescapable. The media plays a large role in society; it defines your life and the way you think. I will be proving this by analysing case studies I have done on films and magazine articles. The aspects I will be discussing to represent the role that the media plays in promoting violence within society are how the media presents the violence, how the audience responds to the violence, other factors which contribute to violence in society, my case studies and what they proved and finally how the media protects society. The media presents the violence in many ways. I will be explaining these ways by analysing two of my contrasting case studies as examples. There are many different narrative contexts that the media have to take into consideration. They are the fictional setting, the character involvement, the form of violence and the physical setting. ...read more.

The audience also has different responses depending on the degree of harm. The degree of harm is how badly hurt the victim is. The audience's response is obviously going to be greater if the degree of harm is a fatal injury. The response will decrease slightly if the degree of harm is either a non-fatal injury or if there's no observable harm. There are 5 sociological theories based on the ways that people are affected by violence in the media. The Desensitisation theory is when people get affected by watching too much violence. The 'Hypodermic' model is when the media injects things into our minds and it becomes addictive. The Cultivation theory is when people slowly develop certain ideas. The Uses and Gratifications theory is when we will watch what we want to and not just what's on TV. The Modelling or Copycat theory is when people start to copy what they see on screen or have read about. The frequency of media violence differs depending on the type of media. In cartoons, violence occurs quite often as it does in many historical films but in comedies and dramas there is not as much. In magazines and newspapers you will also find lots of violence. I will be discussing the other factors which contribute to violence in society, in this section. ...read more.

There are a few things the media can do to protect society. There's the watershed which is at 9pm. This is the time when it's advisable that children don't watch anything from then on. There are also film ratings that mean only certain people can watch certain films. The different ratings are U, PG, 12A, 12, 15 and 18. During the day different types of programmes are put on at different times. For example during 9am until 3.30pm programmes suitable for older people, who have nothing else to do, are put on and at 3.30pm children's programmes are put on because this is around about the time that they come home from school. The target audience which is who a particular programme is aimed at for example the different age groups, different classes/jobs or the different sexes. The quote I used at the beginning of my essay proves exactly my point which is that the media is to blame foe promoting violence within society, but not souly to blame. My answer to the question "Does the level of violence in the media promote violence within society or merely reflect it?" is that the level of violence in the media does promote violence within society. I believe this because I felt strongly whilst reading the magazine and newspaper articles. I think if there was no violence or less violence in the media there will be less violence in society also. Beauty" ...read more.