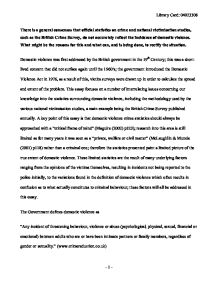 There is a general consensus that official statistics on crime and national victimisation studies, such as the British Crime Survey, do not accurately reflect the incidence of domestic violence. What might be the reasons for this and what can, and is being done, to rectify the situation. Domestic violence was first addressed by the British government in the 19th Century; this was a short-lived concern that did not surface again until the 1960's; the government introduced the Domestic Violence Act in 1976, as a result of this, victim surveys were drawn up in order to calculate the spread and extent of the problem. This essay focuses on a number of interrelating issues concerning our knowledge into the statistics surrounding domestic violence, including the methodology used by the various national victimisation studies, a main example being the British Crime Survey published annually. A key point of this essay is that domestic violence crime statistics should always be approached with a "critical frame of mind" (Maguire (2002) p323); research into this area is still limited as for many years it was seen as a "private, welfare or civil matter" (McLaughlin & Muncie (2001) p118) rather than a criminal one; therefore the statistics presented paint a limited picture of the true extent of domestic violence. These limited statistics are the result of many underlying factors ranging from the opinions of the victims themselves, resulting in incidents not being reported to the police initially, to the ...read more.

(Walby (1999) p2) The variation found between government and independent surveys is immediately obvious when comparing the rates of domestic violence found. An example of this is in comparing the results of the BCS, CASI and the North London Domestic Violence Survey: Physical Assault % With Injuries % 1996 BCS Victim Reports 1.3 1.0 1996 CASI 4.2 2.2 North London Domestic Violence Survey 12.1 8.0 The obvious conclusion to be drawn from this comparison is that the huge differences shown between the national surveys and the North London survey are as a result of under-estimates in the first two examples and possibly also in the third. The British Crime Survey has been criticised for the small sample size on which the national estimates for domestic violence are based (Kershaw (2001) p29), this results in a lack of ecological validity as the results cannot be used to improve national services provided for victims of domestic violence. The BCS statistics are taken from face to face interviews, this may not be the most effective method as respondents may not wish to disclose such private information to a stranger, the amount they are willing to disclose may also change over time, the presence a partner at the time of the interview may also inhibit reporting of domestic violence to the survey (Mirrlees-Black (1999) p70). The BCS also excludes those who have been moved to emergency shelters and those that are homeless, according to Walby, "this methodological ...read more.

This legislation helps to maintain the incentives described by Felson. As a result in this increasing focus from the government and the general public domestic violence will become more accepted in society as being a criminal act, leading to women feeling more confident that their case will be dealt with effectively and that they will receive the support they need, this will in turn result in more research as higher levels of domestic violence are reported. To conclude, crime victim surveys have proved to be an "indispensable tool" (Walby (1999) p2) for analysing domestic violence despite the hesitations and criticisms of some researchers. However, there is always room for improvement in the methodology used in crime victim surveys, examples discussed include the lack of confidentiality found in the British Crime Survey, the isolation of victims outside of the household such as those moved to emergency accommodation and the lack of detail collected in the computer-assisted method. The definition of domestic violence is a factor that continues to limit the reliability of the crime statistics presented; a universal definition is required, particularly between the agencies working with the victims of domestic violence. Despite the limitations found in the research surrounding domestic violence there have been some major progressions, the Domestic Violence, Crime and Victims Act passed in 2004 along with the campaigns launched by the government and the BBC to promote awareness of domestic violence have helped to educate the authorities and the general public on the extent of domestic violence and how it can be dealt with. ...read more.