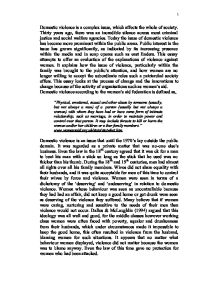 Domestic violence is a complex issue, which affects the whole of society.

Domestic violence is a complex issue, which affects the whole of society. Thirty years ago, there was an incredible silence across most criminal justice and social welfare agencies. Today the issue of domestic violence has become more prominent within the public arena. Public interest in the issue has grown significantly, as indicated by its increasing presence within the media and in soap operas such as east Enders. This essay attempts to offer an evaluation of the explanations of violence against women. It explains how the issue of violence, particularly within the family was brought to the public's attention, and how women are no longer willing to accept the subordinate roles such a patriarchal society offers. This essay looks at the process of change and the innovations to change because of the activity of organisations such as women's aid. Domestic violence according to the women's aid federation is defined as, "Physical, emotional, sexual and other abuse by someone (usually, but not always a man) of a person (usually but not always a woman) with whom they have had or have some form of intimate relationship, such as marriage, in order to maintain power and control over that person. It may include threats to kill or harm the woman and/or her children or other family members." www.womensaid.org.uk/stats/statwhat.htm Domestic violence is an issue that until the 1970's lay outside the public domain. It was regarded as a private matter that was no-one else's business. Even the law in the 18th century agreed that it was ok for a man to beat his man with a stick so long as the stick that he used was no thicker than his thumb. During the 18th and 19th centuries, men had almost all rights over all his family members. Wives did not share equality with their husbands, and it was quite acceptable for men of this time to control their wives by force and violence. ...read more.

Men will do any thing to keep a victim economically and emotionally dependant upon them even keeping them isolated from society to prevent the victim from leaving. Abuser - "she pushes my buttons, she knows what pisses me off" Abuser - "if she would just respect my wishes I wouldn't get upset" Women get their buttons pressed, get pissed off and their wishes not respected. However, they do not show this in forms of violence. Almost all attacks by women on men are self-defence during an assault. Abuser - "men are naturally more violent" Abuser - "men don't know their own strength" Blaming genes or hormones is just an easy way of not accepting responsibility for violent behaviour. The idea that men are naturally more violent because they have to protect the family is pre historic rubbish. How can domestic violence be protecting the family? This is just a sample of the excuses male abusers use to excuse their violent behaviour others include, alcohol and drugs, stress at work or unemployment make me more violent. Many women may find that substance abuse is just a way of controlling her by telling her that it is her fault that he has a drink/drug problem and stress at work is also a load of rubbish would they hit their boss if they were feeling under pressure? No, because they would get the sack and prosecuted so why is it ok for a man to think he can take his work frustrations out on his partner. www.Southend.womansaid.org.uk "The violence and abuse men perpetrate against women and girls is rooted in a tradition of male supremacy that teaches boys and men that females are worthless; are less deserving and may be treated poorly or worse" Bart & Moran (1999) pg. 79 This ideology is still apparent to men even in today's society. It is still clear that we live in a patriarchal world dominated by men even though as Pascall (1997) ...read more.

The ordeal of giving evidence is also harrowing and often the outcome of going to court when assaults are prosecuted often end up with the assailant being fined or given a suspended sentence not much considering what the abused woman and may be her children have been through. There is also the fact that many women who do give evidence at first often later retract their statements because of fear of reprisals from the abuser or no matter how distressing it may sound many reconcile probably because of the pressure placed on her to do so from the abuser. Vincent & Jouriles (2000) Domestic violence can happen to anyone. It can happen in all kinds of relationships regardless of age, ethnicity, social class background, religion etc. it is rarely a one off event in fact it tends to get worse and more severe over time. Domestic violence is more common than people think, but there are ranges of organisations that can help and offer advice. We should however recognise that although domestic violence is more common when the violence is experienced by a women and a man the perpetrator, violence can also occur for men, children, and the elderly and within gay and lesbian relationships. The confusion over what causes domestic violence only tries to shift the attention from the severity of the problem. Although the attitudes of agencies such as the police have dramatically changed over the years, there are still cases where abusers escape prosecution. Every time the police fail to prosecute or the case is dropped by the crown prosecution service or every time we turn a blind eye to our neighbours cries for help or bruises we make it easier fro the abuser to get away with it. Although the government has started to make an effort to tackle issues of domestic violence, this has been patchy and piecemeal. The key element to achieving a consistent approach is funding. Domestic violence has been under funded for to long relying heavily upon the voluntary sector to provide vital life saving services such as refuges. 11 ...read more.