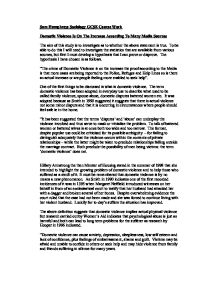 Domestic Violence Is On The Increase According To Many Media Sources

Sam Humphreys Sociology GCSE Course Work Domestic Violence Is On The Increase According To Many Media Sources The aim of this study is to investigate as to whether the above statement is true. To be able to do this I will need to investigate the statistics that are available from various sources, but first I must develop a hypothesis that I can prove or disprove. The hypothesis I have chosen is as follows. "The crime of Domestic Violence is on the increase the proof according to the Media is that more cases are being reported to the Police, Refuges and Help Lines so is there an actual increase or are people feeling more enabled to seek help". One of the first things to be discussed is what is domestic violence. The term domestic violence has been adopted in everyday use to describe what used to be called family violence, spouse abuse, domestic disputes battered women etc. It was adopted because as Smith in 1990 suggested it suggests that there is actual violence not some minor dispute and that it is occurring in circumstances where people should feel safe ie in the home. ...read more.

"Domestic violence can cause anxiety, depression, sleeplessness, low self esteem and lack of confidence, plus feelings of embarrassment, shame and guilt. Victims may be afraid and unable to confide in others or seek help and may hide violence from family and friends suffering in silence for many years. In order to discover whether domestic violence is on the increase I need to look in to the causes of it. It is widely believed that modern living is to blame. Every day life is more stressful and many more family relationships are breaking down is this a possible cause. Many families are living in poverty and are dependent on benefits this also means that couples will be spending more time together and this can lead to increased pressure on them. A number of sources such as the Rowntree Foundation suggest that many families suffer domestic violence through several generations. All these issues will be investigated during the research of this study. To be able to carry out this study a methodology must be adopted. ...read more.

The interview will be comprised of open and closed questions this mixture has been chosen as some of the questions require a more indepth reply than others. The open questions will allow the interviewee to decide freely on the level of detail and content of their answer. Closed questions would be used as they can be used to assess general trends, and results can be readily compared and collated as all interviewees have considered the same content before answering. A further reason for using mainly closed questions is that they are easier and quicker for the interviewee to answer. The data gathered from the interviews will then be collated and any qualitative data would then be contrasted and then represented in graphs, tables and a statement of results. The statement of results, which would come after the general body and discussion of the research, would include all findings and demonstrate whether the original hypothesis has been proved or disproved. It would include a brief summary of the work carried out to complete the research and the reasons for the methods used to undertake it. ...read more.