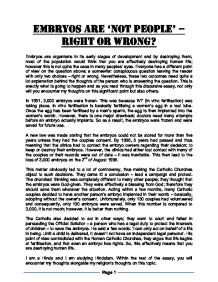 Embryos Are Not People Right or Wrong?

Embryos Are 'Not People' - Right or Wrong? Embryos are organisms in its early stages of development and by destroying them, most of the population would think that you are effectively destroying human life; however this is not quite the case in many peoples' eyes. Everyone has a different point of view on the question above; a somewhat conspicuous question leaving the reader with only two choices - right or wrong. Nevertheless, these two outcomes need quite a lot explanation behind the thoughts of the person who is answering the question. This is exactly what is going to happen and as you read through this discursive essay, not only will you encounter my thoughts on this significant point but also others. In 1991, 3,000 embryos were frozen. This was because IVF (in vitro fertilisation) was taking place. In vitro fertilisation is basically fertilising a woman's egg in a test tube. ...read more.

He said a few words: 'I can only act on behalf of a life in being. Until a child is delivered, it doesn't not have an independent legal persona'. His point of view contradicted with the Roman Catholic Churches, they argue that life begins at fertilisation, and that even an embryo has rights. So, this effectively means that you are destroying human life. I am a Hindu and I am studying Hinduism. Within the rest of the essay, you will encounter my thoughts alongside my religion's thoughts on this topic. It could be argued that embryos in the early process of fertilisation have only a 30 per cent chance of becoming a full human being. So why not use them for the potential benefit of existing human beings, for 14 days, and then destroy them? After all, it is not thought that in these early stages cells are sufficiently developed to feel any pain. ...read more.

It is this human birth that can finally end up with God. By preventing this from happening, it could be said that one is separating one from their God. Hinduism is an ancient religion practiced by hundreds of millions in India and abroad. One commentator describes it as: "...more than just a creed: it is a total culture, a way of life based on the belief in the unity of all creation. Hindus, like Buddhists, see humankind not as an entity separate from animals, but rather as an integral part of the universe that includes all living creatures. Although Hinduism is well known for considering cows to be holy, in Hindu doctrine, all living creatures, including insects, plants, and trees, are thought to enjoy a kinship with one another and to be worthy of respect and life." I will leave you with a quote: "I look upon all creatures equally; none are less dear to me and none are more dear." Bhagavad Gita ?? ?? ?? ?? Page 1 ...read more.