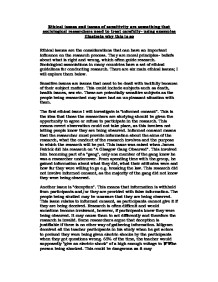 Ethical issues and issues of sensitivity are something that sociological researchers need to treat carefully- using examples illustrate why this is so?

Ethical issues and issues of sensitivity are something that sociological researchers need to treat carefully- using examples illustrate why this is so Ethical issues are the considerations that can have an important influence on the research process. They are moral principles- beliefs about what is right and wrong, which often guide research. Sociological associations in many countries have a set of ethical guidelines for conducting research. There are six main ethical issues; I will explore them below. Sensitive issues are issues that need to be dealt with tactfully because of their subject matter. This could include subjects such as death, health issues, sex etc. These are potentially sensitive subjects as the people being researched may have had an unpleasant situation with them. The first ethical issue I will investigate is "informed consent". This is the idea that those the researchers are studying should be given the opportunity to agree or refuse to participate in the research. This means covert observation could not take place, as this involves not letting people know they are being observed. Informed consent means that the researcher must provide information about the aims of the research, what the conduct of the research involves and the purpose to which the research will be put. ...read more.

Some research methods that are considered ethical may result in an invasion of privacy. For example, the informal, unstructured interview may develop into a friendly chat between the researcher and the participant, in this relaxed atmosphere the participant may forget they are being observed and give out information that they would not normally and might later regret it. Paul Willis may have had a problem with privacy when he did his research. He openly observed a gang of teenage boys and researched their attitudes towards school and others around them. As this observation was open, it may have encouraged the "lads" to be more exaggerated with their comments and actions and do things they would not normally to "show off". Afterwards the conclusions Willis had drawn would not be accurate and the way the "lads" were portrayed may offend them. Also, around friends the participants would tend to relax more and sometimes forget the observer is there. This may encourage them to release private or personal information they would not normally under observation conditions. The fourth issue is "protection from harm". There is a general agreement that research participants should be protected from harm. This includes everything from the time when the research is taking place, and the long-term effects (if any) ...read more.

The guarantee has to be: I will respect your confidentiality provided I am not made aware of things I cannot keep a secret. In conclusion, without ethical issues being taken into consideration, a lot of physical or psychological damage could occur. All of the above factors must be taken into consideration when designing research, although how a particular sociologist deals with ethical issues will depend on their own ethical values. It also depends on what sort of person the researcher is, are they highly principled? Or are they willing to cut a few corners to make their research easier or more accurate? How strict a researcher is can definitely benefit/ruin their research. Telling the complete truth to participants about the research could undermine the research or cause research problems, as if the participants know they are being observed it could cause them to act very differently. A lot of issues are not straightforward, some conflict and often need a great deal of thought put into them. To do completely accurate and valid research, the balance between respecting participants' privacy, not deceiving them, being careful not to put them at risk of harm and making sure the data collected is true has to be right, and this is a difficult balance to get. ...read more.