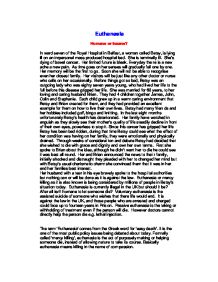 Euthanasia Humane or insane? In ward seven of the Royal Hospital in Belfast, a woman called Betsy, is lying ill on an impersonal mass produced hospital bed. She is terminally ill. She's dying of bowel cancer. Her limited future is bleak. Everyday there is a new ache a new pain. As time goes on her senses will gradually fail one by one. Her memory will be the first to go. Soon she will not be able to recognise even her closest family. Her visitors will be just like any other doctor or nurse who calls on her occasionally. Before things got so bad, Betsy was an outgoing lady who was eighty seven years young, who had lived her life to the full before this disease gripped her life. She was married for 60 years, to her loving and caring husband Brian. They had 4 children together James, John, Colin and Stephanie. Each child grew up in a warm caring environment that Betsy and Brian created for them, and they had provided an excellent example for them on how to live their own lives. Betsy had many friends and her hobbies included golf, bingo and knitting. In the last eight months unfortunately Betsy's health has deteriorated. Her family have watched in anguish as they slowly see their mother's quality of life steadily decline in front of their own eyes, powerless to stop it. Since this cancer has gripped her life Betsy has been bed ridden, during that time Betsy could see what the effect of her condition was having on her family, they were emotionally and physically drained. ...read more.

approve of it, however if a law is made which allows a person to help someone die, there would be safeguards in place to make sure that the law wouldn't be abused. In the UK today there is no law that deals with euthanasia. Usually those people who are up for trial for helping someone to die face the charge of murder or under the law on suicide, depending on the circumstances. Those who are convicted of helping another person to die could face up to life in prison (for murder), or fourteen years (assisting a suicide). This is the law but in reality the system operates a little differently. Usually those people who are convicted of murder or assisting a suicide usually are given light sentences which often don't involve prison sentences. I believe that this is because the courts are sympathetic and sometimes approve to the defendants cause and see the position they were put in often taken their side. The public opinion of the law on euthanasia or the lack there of, is overwhelmingly in favour of legalising voluntary euthanasia. In 1997, out of nearly three thousand people who took part in a sun newspaper telephone opinion poll, an amazing 97% said terminally ill people should have the right to die with dignity. There have been numerous survey's which have been conducted through the years, in 1993 for example a poll showed that sex, age, religion or economic class made little difference to peoples views on the subject and surprisingly the majority from ALL religions were in favour of voluntary euthanasia. It is not just the public who can have a say in this matter, the very people who may have to carry out any of these lethal injections must be given a say. ...read more.

But what is better, letting someone suffer a prolonged and very painful life, or allowing him or her to die with dignity, in peace and without pain? In an article I read that a young girls grandmother had died of bowel cancer. She took three weeks to die- three full weeks of the most appalling agony. In fact she was crying out for most of that time for the doctors to end her torment. In the end she was screaming in pain, no medical cure or painkiller could be found to ease her pain. In the end is it too much to ask for the right for her to die peacefully? Why cant these hardworking, loving and harmless people have the right to choose to die? I say yes, I do not believe they should be humiliated in front of their families as a nurse empties their bedpan in full view of the entire ward. Don't you? This issue needs a lot of thought. Many people agree with voluntary euthanasia, many disagree but there is also a large amount of people undecided on the matter. Maybe in a couple of weeks radical steps with have been taken by the government to legalise euthanasia, at least then Betsy's life will not have been in vein, but maybe by then it will have been too late, and her loving husband Brian might have had to take things into is his own hands. The time will come when the Government and medical services will have to open their eyes to euthanasia, and there will be a lot of debate on the subject. Until then the euthanasia debate will continue to linger, just like a terminal disease. By Aidan Mc Guckin ...read more.