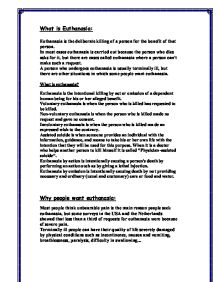 Euthanasia is the deliberate killing of a person for the benefit of that person.

Almost three out of four doctors (74%) would refuse to perform assisted suicide if it were legalised. A clear majority (56%) also consider that it would be impossible to set safe bounds to euthanasia as compared to 37% who disagree. In addition there are marked differences in attitudes to hospice and geriatric care between doctors opposed to euthanasia and those who support such a policy. These facts emerge from a major survey completed by 986 doctors by the Opinion Research Business (ORB) over a two-week period - March 26-April 9, 2003. To ensure impartiality, ORB had the final decision on all questions. The survey was administered by the foremost medical internet company in the UK, Doctors.Net.UK, who contacted 9,000 doctors and medical specialists, including those in palliative care, oncology, psychiatry, geriatrics, general surgery and general practice. There was an 11% response which is typical for an Internet survey of this nature. The survey was commissioned by Right To Life and the initial results were launched at a press conference held by the All-Party Parliamentary Pro-Life Group in the House of Commons on Tuesday, May 13. Chairman of the parliamentary group, Jim Dobbin MP (Labour - Heywood & Middleton) said: "We welcome these initial results. They are very much in keeping with a survey published in Hospital Doctor (13th March, 2003) ...read more.