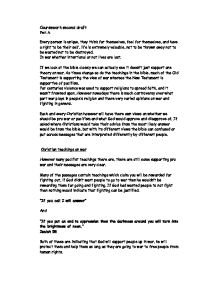 Every person is unique

Coursework second draft Part A Every person is unique, they think for themselves, feel for themselves, and have a right to be their self, life is extremely valuable, not to be thrown away not to be wasted not to be destroyed. In war whether intentional or not lives are lost. If we look at the bible closely we can actually see it doesn't just support one theory on war. As times change so do the teachings in the bible, much of the Old Testament is supporting the view of war whereas the New Testament is supportive of pacifism. For centuries violence was used to support religions to spread faith, and it wasn't frowned upon. However nowadays there is much controversy over what part war plays in people's religion and there very varied opinions on war and fighting in general. Each and every Christian however will have there own views on whether we should be pro war or pacifism and what God would approve and disapprove of. If asked where Christians would take their advice from the most likely answer would be from the bible, but with its different views the bible can confused or put across messages that are interpreted differently by different people. Christian teachings on war However many pacifist teachings there are, there are still some supporting pro war and their messages are very clear. Many of the passages contain teachings which claim you will be rewarded for fighting out, if God didn't want people to go to war then he wouldn't be rewarding them for going and fighting. If God had wanted people to not fight then nothing would indicate that fighting can be justified. "If you call I will answer" And "If you put an end to oppression then the darkness around you will turn into the brightness of neon." Isaiah 58 Both of these are indicating that God will support people up in war, he will protect them and help them as long as they are going to war to free people from human rights. ...read more.

Attack on a national honour, an attack on state religion, an attack on a neighbour or ally are all just causes. Legitimate authority: Only constituted public authorities can declare the use of deadly force or start the war. The right intention: Only in a truly just cause and soley for the purpose that you are correcting a suffering wrong is considered the right intetion wheras going to war for personal or material gain is not. Probablility of success: Arms may not be wasted in a war if there is little chance of winning, you must have reasonable assuirty that you can win before going to war. Last resort: War must be the last resort and peacefull means must been thoroughly tried a few times and failed before war is even cocidered Jus in bello, how to conduct a just war. Once a war is started you cant just fight there are more conditions to follow. Discrimination The war is between the leaders of the countrys envoloved not between the innocent civilians who have nothing to do with the circumstances that have created this war so they should not be punished for others disagreements. Bombing civilian residental areas, weapons or mass distruction and any type of terrorism or anything where civilians are at risk. Proportionality The wrong commited by the other country has to be bared in mind whilst using force, and the good that may come all this must be taken into concideration. Minimum Force The war should go on the principle of the less force used the better. This is ment to limit the amount of force used, and stop excessive force altogether, this can cut down the number of deaths, and descruction, before any force is used you must think if less can be used and if so use the lesser amount. Examples of just or unjust wars Examples of just wars in US history are World War Two, Korea, Vietnam, Desert Storm. ...read more.

They sometimes believe the view of war to be hypocritical for example in the UK you kill someone you get sent to prison and are punished however if you are fighting at war for the armed forces and you kill people in the attempt to win the war you come home are receive medals and are rewarded. No Christians whether they are totally against war or view war as a last resort can view war as not being killing, however they can take the view that killing is not wrong. Pacifist Christians will always agree that war wrong because they believe that war is killing and killing is wrong. They take pacifist teachings from the bible and use them to back up their view that they will be rewarded for not fighting and trying to keep the peace and not sacrificing human life. Life is sacred and a gift from God so should not be damaged or taken for granted and letting people die is damaging the temple which is not supported by pacifist Christians. "The body is Gods temple" This is one of the teachings they go by. However some Christians disagree with "war is killing". When war is defending the country, defending the people of the country they believe that war is right. We were given free will, free will implies we have the right to make our own choices if God had not wanted us to go to war then we would not have free will to choose too. If war is the lesser of two evils some Christians view it right to go too war as they are saving more lives than if they just sat back and did nothing. I believe the statement to be wrong, yes killing is wrong in any situation not just war but in war you are not victimising people, you are fighting for freedom, for justice, and ironic as it is, for peace. ...read more.