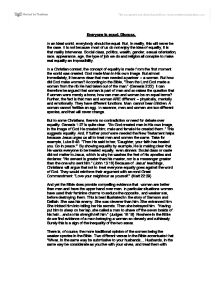 Everyone is equal. Discuss. In an ideal world, everybody should be equal. But, in reality, this will never be the case. It is not because most of us do not enjoy the idea of equality, it is that reality intervenes. Social class, politics, wealth, gender, sexual orientation, race, appearance, age, the type of job we do and religion all conspire to make real equality an impossibility. In a Christian context, the concept of equality is made from the first moment the world was created. God made Man in His own image. But almost immediately, it became clear that man needed a partner - a woman. But how did God make woman? According to the Bible, "Then the Lord God made a woman from the rib He had taken out of the man." (Genesis 2:22) It can therefore be argued that woman is part of man and so raises the question that if women were merely a bone, how can man and woman be on equal terms? ...read more.

(John 13:16) Because of Jesus' teachings, Christians will argue that not to treat everyone equally goes against the word of God. They would reinforce their argument with second Great Commandment: "Love your neighbour as yourself." (Matt 22:39) And yet the Bible does provide compelling evidence that women are better than men and have the upper hand over men. In particular situations women have used their feminine charms to seduce the opposite, and weaker sex, before destroying them. This is best illustrated in the story of Samson and Delilah. She was his enemy. She was cleverer than him. She entranced him. She tricked him into telling her his secrets. Then she betrayed him. "Having put him to sleep on her lap, she called a man to shave off the seven braids of his hair...and so his strength left him." (Judges 16:19) Nowhere in the Bible do we find evidence of a man betraying a woman so cleverly and ruthlessly. ...read more.

Leviticus 13:46 knows what we should do when that happens. "As long as he has the infection he remains unclean. He must live alone; he must live outside the camp." This was how lepers were treated. And those who have touched dead bodies are treated just the same. "Command the Israelites to send away from the camp anyone who has an infectious skin disease or a discharge of any kind, or who is ceremonially unclean because of a dead body." (Numbers, 5:2) So, even then the job that you did counted against you. Of course we should be equal, but prejudices in the world, deeply held beliefs no matter how irrational and the basic feelings of inferiority and superiority mean we will never have a society where everyone is the same. It is against the law to treat men and women differently in the UK. But, even today, this is being tested in our courts. Perhaps, legislation will force us to do something that common sense dictates - to treat everyone with respect and dignity. ...read more.