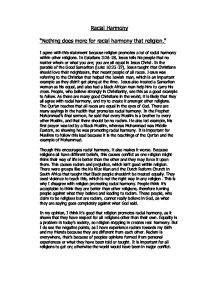 Racial Harmony "Nothing does more for racial harmony that religion." I agree with this statement because religion promotes a lot of racial harmony within other religions. In Galatians 3:26-28, Jesus tells his people that no matter whom or what you are; you are all equal in Jesus Christ. In the parable of the Good Samaritan (Luke 10:25-37), Jesus taught that Christians should love their neighbours, that meant people of all races. Jesus was referring to the Christian that helped the Jewish man, which is an important example as they didn't get along at the time. Jesus also treated a Samaritan woman as his equal, and also had a black African man help him to carry his cross. ...read more.

In the Prophet Muhammad's final sermon, he said that every Muslim is a brother to every other Muslim, and that there should be no racism. He also led example, his first prayer was led by a Black Muslim, whereas Muhammad was Middle Eastern, so showing he was promoting racial harmony. It is important for Muslims to follow this lead because it is the teachings of the Qur'an and the example of Muhammad. Though this encourages racial harmony, it also makes it worse. Because religions all have different beliefs, this causes conflict as one religion might think their way of life is better than the other and they may force it upon them. ...read more.

These people, who claim to be religious but are racism, cannot really believe in God, as what they are saying goes completely against what God said. In my opinion, I think it's good that religion promotes racial harmony, as it shows that they have respect for all religions other than their own. Equality is a problem in today's society, so religion stepping in creates real harmony. But I do see the negative points, as I have experience racism towards my faith and my friends because they are different from each other. Racism is everywhere, that's because of peoples opinions formed from personal experiences or what they have been told or taught. It is important for all religions to get on; otherwise the world would have been in major conflict. ...read more.