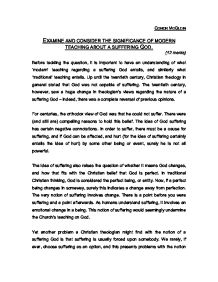 Examine and consider the significance of modern teaching about a suffering God.

CONOR MCGLOIN EXAMINE AND CONSIDER THE SIGNIFICANCE OF MODERN TEACHING ABOUT A SUFFERING GOD. (12 marks) Before tackling the question, it is important to have an understanding of what 'modern' teaching regarding a suffering God entails, and similarly what 'traditional' teaching entails. Up until the twentieth century, Christian theology in general stated that God was not capable of suffering. The twentieth century, however, saw a huge change in theologian's views regarding the nature of a suffering God - indeed, there was a complete reversal of previous opinions. For centuries, the orthodox view of God was that he could not suffer. There were (and still are) compelling reasons to hold this belief. The idea of God suffering has certain negative connotations. In order to suffer, there must be a cause for suffering, and if God can be affected, and hurt (for the idea of suffering certainly entails the idea of hurt) by some other being or event, surely he is not all powerful. The idea of suffering also raises the question of whether it means God changes, and how that fits with the Christian belief that God is perfect. In traditional Christian thinking, God is considered the perfect being, or entity. Now, if a perfect being changes in someway, surely this indicates a change away from perfection. ...read more.

This argument also raised questions concerning the empathetic nature of God. In order to be empathetic, God must share our suffering with us. This a major change in theological thinking, but there are problems regarding the nature of such a change. It could be said that the Church was simply changing its doctrine in order to accommodate a changing world. The Church must be careful not to change for the wrong reasons, as it would undermine its influence, and the respect it has. In the twentieth century, theologians also undertook the restudying of the Old Testament. New conclusions were drawn regarding the nature of God. He was seen, in the Old Testament, as a 'passionate' God, who understood the needs of his people and responded accordingly. He is seen to be angry at times, and is capable of punishing those who anger him. These are all seemingly emotional capabilities, and seem to indicate that God is able to relate to his people because he actually feels what they feel. This meant the Church had to reassess how they looked upon the nature of a suffering God, especially in relation to the study of the bible. Another significant problem raised during the twentieth century is that of religious plagiarism. ...read more.

The question of whether the Church was just finally succumbing to pressure from its followers has to be asked, though. This is, after all, a massive change in the belief system of the Church. It is also important to examine the argument concerning the nature of, and connection, between emotions. Christians often talk about God loving his people. The human perception of love is of an extremely strong emotion, and one that invariably involves suffering as well. If God is not capable of suffering with us, modern theologians said, surely God cannot be capable of experiencing love for us. Love will always involve suffering, and God must understand this emotion in order to love. The change in theologian thinking appears to have made God's love for us seem more certain than before. There is one more counter-argument to the modern teaching regarding God's impassibility. Christians believe God to be perfect, but if God is perfect, yet still suffers, is there any hope of a life free from suffering? Perhaps this new teaching could be considered as damning humans to a life of suffering, rather than giving them the opportunity to believe in a life free from pain. The change in the Church's teaching regarding a suffering God has undoubtedly seen a huge change in theology. It has shown itself to be a constantly changing and evolving thing, and has seemingly shown God to still be relevant in a modern world. ...read more.