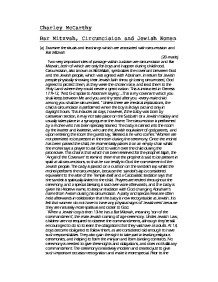 Charley McCarthy Bar Mitzvah, Circumcision and Jewish Women (a) Examine the rituals and teachings which are associated with circumcision and Bar Mitzvah (20 marks) Two very important rites of passage within Judaism are circumcision and Bar Mitzvah, both of which are only for boys and happen during childhood. Circumcision, also known as Brit Millah, symbolizes the covenant between God and the Jewish people, which was agreed with Abraham. In return for Jewish people physically showing their Jewish faith through being circumcised, God agreed to protect them, as they were the chosen race, and lead them to the Holy Land where they could create a great nation. This is instructed in Genesis 17:9-12, "And G-d spoke to Abraham saying: ...This is my covenant which you shall keep between Me and you and thy seed after you -every male child among you shall be circumcised." Unless there are medical implications, the child is circumcision is performed when the boy is 8 days old and only in daylight hours. This includes all days, however, if the baby was born by caesarean section, it may not take place on the Sabbath or a Jewish holiday and usually takes place in a synagogue or the home. The circumcision is performed by a mohel who has been specially trained. The baby is carried into the room by the kvatter and kvatterin, who are the Jewish equivalent of godparents, and upon entering the room the guests say, 'Blessed is he who comes.' Women are not permitted to be present in the room during the ceremony. Once the mohel has been passed the child, he momentarily places it on an empty chair whilst the mohel says a prayer to ask God to watch over the child during the procedure. This chair is that which has been reserved for the prophet Elijah, the 'Angel of the Covenant' to remind them that the prophet is said to be present in spirit at all circumcisions, so that he can testify to God the commitment of the Jewish people. ...read more.

Women are seen just as important as men because Judaism believes that God is not exclusively male or female, but actually has a mix of both. In traditional Judaism, Jewish women in fact had more rights than those of other females in western civilisation as had to right to buy, sell and own property, which other women did not have until around 100 years ago. Within the home, Jewish women also have the right to decline sex even if this is within marriage, as sexual intercourse is believed to be the woman's right and not the man. In other religions, it is thought of as natural that the couple should both consent to sex, so the wife refusing may not be seen as acceptable in a marriage. In this way, Jewish women have more rights within their marriage than other women. There is various organisations set up to attempt to change the rights of Jewish women, and make themselves heard, such as Jewish Women Watching. These fight for the right to not be discriminated against, for rights such as ceremonies to celebrate the birth of a girl, similar to Pidyon Haben, and equal rights in the synagogue. Even though women may have to work hard to take care of their home and family, with little break from domestic duties, this is rewarded by a minor festival on the first day of each month called Rosh Chodesh, which is 'the women's holiday' given to them by God as a reward for them not worshipping the golden calf when the men did. Despite Jewish women perhaps being more involved with their home and family than other modern women, they get this deserved rest, which is perhaps more than many other women get who have to look after their families and homes and go to work. The role of Orthodox Jewish women does seem to be in conflict with the 21st century role of women, to some extent, though within Reform Judaism this is not the case so much. ...read more.

Another view, opposite to that of the Jews being a sacrifice, was the point made by Esther Jungreis. She said that the holocaust ultimately saved the Jews by forcing them to rethink their 'Jewishness' so that they had to work harder to survive. Through this they ensured that they weren't to die out as a race. Many Jews went to like in the USA, where there is now a large population of American Jews, encouraging larger the growth of the religion. A counter view to this however is that the Jews could possibly build up too much success in countries that are not their own such as the USA, creating jealously and resentment from non-Jews and therefore causing another holocaust to take place. Albert Friedlander talks about that we need to move on from the holocaust, and although always remember what happened, not keep looking back and wondering why it took place. It has happened and nothing can be done so the best needs to be made of the future instead. There are many memorials, such as huge holocaust museums, Yad Vashem and sites devoted to remembering those who died. However, the most important thing is to build new hope for the future and make the Jews stronger so that such a thing is prevented from ever happening again. Ezekiel 37 talks of resurrection and hope for a new life in the future, which can be applied to the Jews new life, after the holocaust had taken place. Two more types of Jew were also created as a result of the holocaust, as previously most were orthodox but now, reform and liberal Jews are both common. None of the views from Jewish theologians can be judged right or wrong, because nobody is certain even whether God exists, let alone his apparent reasoning behind things that happen. Therefore, although some views can be assessed as more believable than others, it is up to the individual what they believe to have happened to let the holocaust take place. ...read more.