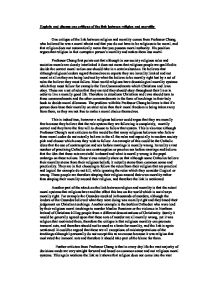 Explain and discuss one critique of the link between religion and morality One critique of the link between religion and morality comes from Professor Chung, who believed he was a moral atheist and that you do not have to be religious to be moral, and that religion does not automatically mean that you possess moral authority. His position argues that religion in fact corrupts a person's morality and makes them less moral. Professor Chung first points out that although in our society religious rules and societies morals are closely interlinked it does not mean that religious people are qualified to decide the correct moral action one should take in a certain situation. He believes that although religious leaders regard themselves as experts they are in reality limited and not moral at all as they are being lead not by what the believe to be morally right but by a set of rules the believe they must follow. Most world religions have deontological morality systems which they must follow for example the Ten Commandments which Christians and Jews obey. These are a set of rules that they are told they should obey throughout their lives in order to live a morally good life. Therefore in situations Christians and Jews should turn to these commandments and the other commandments in the form of teachings in their holy book to decide moral dilemmas. ...read more.

Another example is the Serbian Orthodox who were lead by their religious moral teachings to murder Muslim Bosnians or the violence in Northern Ireland of Christians killing people from a different denominations of Christianity. Surely it would be generally agreed upon that these acts of murder are all morally wrong, yet it was religion that motivated them, therefore the critique is that religious morality can promote immoral acts, and therefore should not be used as a basis for morality, and the link is again weakened. It could be argued that these are all exceptions of misinterpretations of the teachings although I personally do not accept this as an excuse because it was religion that motivated the immoral acts and therefore it should take part of the blame for them. Further criticism from Professor Chung is that in every day life the vast majority of decisions made are very straight forward and based on common sense and not religious moral systems. This again weakens the link as it shows that religion does not come into the vast majority of decisions made, even by religious people. A religious believer could defend this saying it is more practical and when it comes to big important moral decisions such as abortion or murder it is religion that people turn to for their moral guidance. ...read more.

This furthermore weakens this link as it shows that morality is not from birth linked to religion. Professor Chung's final part of his attack on the link between morality and religion is based on the religious idea of God. If God is omnipotent which most religions believe he is then he has the power to stop a person committing immoral acts, and if he does not then he is responsible for that person's actions due to aiding and abetting the person through divine negligence. This would result in a person losing their moral responsibility and this is exactly the opposite of what religion believes, so it is self contradicting and again the link is weakened. In conclusion it is clear that Professor Chung has a strong argument against the link between religion and morality. He points out on more than one occasion that religious moral codes are not only impractical and often lead to immoral acts, but are self contradicting and often ignored by religious believers. Moreover he also points out that a person does not have to be religious to be moral, and therefore how can religion shape morality if some people are not religious but still moral. This clearly shows that morality comes from human nature and not religion, and therefore his argument is very effective, and in my opinion disproves the link of morality and religion. ...read more.