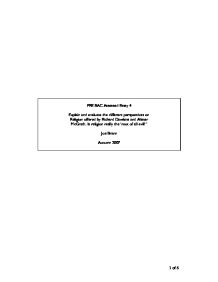 Explain and evaluate the different perspectives on Religion offered by Richard Dawkins and Alister McGrath. Is religion really the 'root of all evil? '

many religious scientists that find God so much in science for example Owen Gingerich discovery of a evidence of playing a large part in the origins of the universe. Or Francis Collins's discovery of Gods footprint in the Genome Project. One idea that they both do agree by both disagreeing is with Stephen Jay Gould, arguably one of America's leading evolutionary biologists. His idea of NOMA (non-overlapping magisteria) is the belief that science and religion can't overlap. Though they disagree for very different reasons: for Dawkins it is because Gould is still entertaining the idea of a possible second reality; where Dawkins says there is only one and that is our reality. McGrath theory (POMA) that there is a partially overlapping magisteria; is the idea that science and religion don't and can't completely overlap but there are various points that they agree on and this I think is the most sensible and correct point. Alister helps his theory throughout the book by naming numerous scientists who do in fact believe that they can overlap and scientist's who do indeed believe in God. ...read more.

This has already been partially covered over the idea of violence sprouting from almost and views it being the extremists and the fundamentalist who cause the evil not the religion. There is also the fact that when you look in to it all religion preaches a message of peace and the end to violence for as Alister says wasn't 'Jesus the object, not the agent, of violence'. This and lots of what I have written already I think shows the religion is not the root of all evil. Undoubtedly the root of some, and a lot, of evil and even more is in the name of it. Though there is also so much good in it and so much good comes of it. In conclusion I think that although it is the root of some evil religion is a good think that in this day and age, even with both Dawkins and McGrath's arguments can neither be proved, disproved or properly judged and even if we are one day to find out that it is not real or true it has been a great attribute and pillar for society and the human race that has, I think in the long run, had a positive impact on the world. ?? ?? ?? ?? 1 of 6 ...read more.