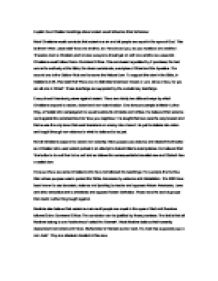 Explain how Christian teachings about racism would influence their behaviour

Explain how Christian teachings about racism would influence their behaviour Most Christians would conclude that racism is a sin and all people are equal in the eyes of God. This is shown when Jesus said 'love one another, as I have loved you, so you must love one another'. Therefore from a Christian point of view everyone should get on with one another as Jesus did. Christians would follow Divine Command Ethics. This conclusion is justified by 2 premises; the first one is the authority of the Bible; the divine commands, examples of Christ and the Apostles. ...read more.

One famous example is Martin Luther King, a Pacifist who campaigned for equal treatments of blacks and whites. He believed that violence went against the commandment to 'love you neighbour'. He taught that love was the way forward and that is was the only force that could transform an enemy into a friend. He put his beliefs into action and fought through non-violence to what he believed to be just. Not all Christians respond to racism non-violently. Many people use violence and Dietrich Bonhoeffer is a Christian who used violent protest in an attempt to defeat Hitler's racial policies. ...read more.

These were the sort of groups that martin Luther King fought against. Muslims also believe that racism is a sin as all people are equal in the eyes of God and therefore follows Divine Command Ethics. The conclusion can be justified by these premises. The first is that all Muslims belong to one 'brotherhood' called the 'Ummah'. Most Muslims believe that humanity descended from Adam and Hawa. Muhammad in his last sermon said, 'no Arab has superiority over a non-Arab'. They are absolute moralist in this view. Some Humanists use a similar line of argument to St Paul and Islam in arguing that as all humans are drawn from the same primordial ancestor and so they are equal. Their reasoning is justified by the conclusion based on evolution ...read more.