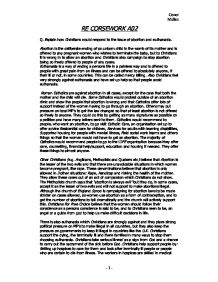 Explain how Christians would respond to the issue of abortion and euthanasia.

Q. Explain how Christians would respond to the issue of abortion and euthanasia.

Abortion is the deliberate ending of an unborn child in the womb of its mother and is offered to any pregnant women who wishes to terminate the baby, but to Christians it is wrong in to allow an abortion and Christians also campaign to stop abortion being so freely offered to people of any cases.

Euthanasia is a way of ending a persons life in a painless way and is offered to people with great pain from an illness and can be offered to absolutely anyone, if their ill or not, in some countries. This can be called mercy killing. Also Christians feel very strongly against euthanasia and have set up help so that people avoid euthanasia.

Roman Catholics are against abortion in all cases, except for the case that both the mother and the child will die. Some Catholics would protest outside of an abortion clinic and show the people that abortion is wrong and that Catholics offer lots of support instead of the women having to go through an abortion. Others may put pressure on local MP’s to get the law changed so that at least abortion is not offered so freely to anyone. They could do this by getting as many signatures as possible on a petition and have many letters sent to them. Catholics would recommend to people, who want an abortion, to go visit Catholic Care, an organisation set up to offer advice Residential care for children, Services for adults with learning disabilities, Supported housing for people with mental illness, Field social work teams and others things so that the women would not have to get an abortion. The majority of Catholics would recommend people to go to the LIFE organisation because they offer care, counselling, financial help/support, education and housing if needed. They offer these things to almost anyone.

Other Christians (e.g. Anglicans, Methodists and Quakers etc) believe that Abortion is the lesser of the two evils and that there are unavoidable situations in which women become pregnant, like rape. These denominations believe that abortion is only allowed in 3 other situations: Rape, Handicap and risking the health of the mother. They allow these cases out of an act of compassion which Christians do not show. The Methodists church says that “abortion is always evil” but they do, in some cases, accept it as the lesser of two evils and will not support to make abortions illegal. Although the church of England Synod is campaigning for abortion laws to be made stricter on cases allowed, as women use abortion as a form of contraception, and to get the number of abortions to fall dramatically and the church will actively support this. Christians For Free Choice believe that the women should follow their conscience as a persons conscience is said to be, and to Christians seen to be, an angel or a guide from god to help us make difficult decisions in life.

There is also euthanasia which Christians are strongly against and they place strong political pressure on MP’s to make illegal in all countries, but they also keep the pressure on governments to keep it illegal in countries like the U.K. Christians support the dying, the terminally ill and there families in many ways to stop them choosing euthanasia. Christians take serious illness’ as a sign from God and a chance to carry out the sacrament of the sick before God. Christians help support people by:

Setting up hospices to care for them and look after terminally ill people or people who are certain to die from illness. The workers in hospices are skilled in medical care and have specially trained experts to help with emotionally sick physiologically or people who are worried. Christians in the hospice movement and most others believe that death is not the end f life just a stage in the process. They should not be afraid of death but have a duty of caring for those who are dying. Hospices provide pain relief and a dignified death.

Pilgrimages, like the Lourdes pilgrimage gives hope and strong self support to the sick and also a chance for Christians to offer practical support to those who need help physically and mentally. Pilgrimages offer special treatment and also faith healing. Pilgrimages like Lourdes have had many miraculous stories of people cured in Lourdes which encourages more people to go on a pilgrimage and encourages people even more to go to Lourdes to try the experience themselves.

Because of strong political pressure in England, from Christians, Euthanasia is still illegal in England but it is widely used throughout the world to kill people meaninglessly.

If the patient is in horrific pain and has no hope at all of recovering or the pain easing, or

If the quality of life is poor within the patients life like Diane Pretty who asked to be allowed to die as she did not want to live through her slow and very painful death,

or if the person is living in a persistent vegetative state [PVS] where the brain of the person is believed to be seriously damaged and usually unable to reawaken from the state and if this does happen it is usually seen as a spectacular event and this is unusual to medical staff for someone to awake.

Different denominations of Christianity react in different ways to euthanasia and abortion and so therefore offer different practical help and alternatives to abortion and euthanasia. Some Christians choose to allow them in extreme cases and others don’t allow them in any cases, Christians give strong political pressure on MP’s to change the law but some in the favour of allowing euthanasia and abortion, others to change it to stop both of them and make them illegal.