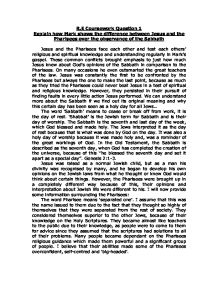 R.E Coursework Question 1 Explain how Mark shows the difference between Jesus and the Pharisees over the observance of the Sabbath Jesus and the Pharisees face each other and test each others' religious and spiritual knowledge and understanding regularly in Mark's gospel. These common conflicts brought emphasis to just how much Jesus knew about God's opinions of the Sabbath in comparison to the Pharisees. On many occasions he even outsmarted the great teachers of the law. Jesus was constantly the first to be confronted by the Pharisees but always the one to make the last point, because as much as they tried the Pharisees could never beat Jesus in a test of spiritual and religious knowledge. However, they persisted in their pursuit of finding faults in every little action Jesus performed. We can understand more about the Sabbath if we find out its original meaning and why this certain day has been seen as a holy day for all Jews... The word 'Sabbath' means to cease or break off from work, it is the day of rest. 'Shabbat' is the Jewish term for Sabbath and is their day of worship. The Sabbath is the seventh and last day of the week, which God blessed and made holy. The Jews interpreted it as the day of rest because that is what was done by God on the day. It was also a holy day of worship because it was made holy and, was a reminder of the great workings of God. ...read more.

For example the Pharisee who questioned Jesus about the most important commandments. If we analyse the conflicts between Jesus and the Pharisees which brought the most emphasis to their difference in interpretation and attitude we will begin to understand this more, in general; The First Example is; the "Man with an Evil Spirit" (Mark 1: 21-28): Nobody complains about this Sabbath miracle because Jesus was not yet seen as a major threat to the Pharisees. Until this point in the life of Jesus, he was only seen as a good teacher and a preacher of his faith. He had not yet 'publicly' displayed his power, yet since this event took place in a synagogue, many people, including religious leaders such as Pharisees and Sadducees saw Jesus' capabilities. Although it was simply a fraction of his true power, Jesus automatically was viewed as someone special and the bystanders of the time were amazed: "The people were all so amazed that they asked each other, 'What is this? A new teaching - and with authority! He even gives orders to evil spirits and they obey him. News about him quickly spread over the whole region of Galilee.' From this point onwards, Jesus became a threat to the Pharisees, Sadducees and other teachers of the law. At this point it was not yet serious, but his true identity as the Messiah slowly began to unravel to the world. The Second Example is; "Questions about the Sabbath" (Mark 2: 23-28): One Sabbath day, Jesus and his disciples were travelling through a corn field and they began to pick and eat some ears of corn. ...read more.

Two good examples of this are; when Jesus and his disciples were picking corn in the fields on the way to a synagogue in Capernaum and were stopped by the Pharisees, who began to proclaim the fault in there actions: picking corn was considered as work on the Sabbath. This was viewed in a different way by Jesus, as he saw it as a necessity to eat when needed. Another good example is when Jesus was in a Synagogue healing the man with a paralysed hand and asked the crowd if it was right to save a man's life or to destroy it. Here we see how the Pharisees made their exaggerated views on the Sabbath overlook the basic principles of Judaism and of life. The Pharisee's belief in the Sabbath was so orthodox that it predicted their every action during a Sabbath day. However it may be stereotypical to say that there was a difference between Jesus and Pharisees view on the Sabbath because, not all Pharisees may have considered the Sabbath so significant that it controlled them on that day. Some Pharisees may have perceived the Sabbath in the same way as Jesus did, because some Pharisees were actually followers of his wisdom therefore quite wise themselves. However, even so all Pharisees considered themselves as separated ones and this will always be the main and most significant difference between Jesus and all Pharisees. To Jesus, image did not matter he had no hesitation in mixing with the lowest of "outcasts" or the greatest of Kings; to him they were all equal human beings. The only thing that set people apart was their purity of heart. ...read more.