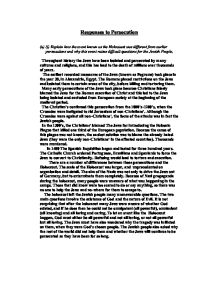 Explain how the event known as the Holocaust was different from earlier persecutions and why this event raises difficult questions for the Jewish People;

Responses to Persecution (a) (i) Explain how the event known as the Holocaust was different from earlier persecutions and why this event raises difficult questions for the Jewish People; Throughout history the Jews have been isolated and persecuted by many cultures and religions, and this has lead to the death of millions over thousands of years. The earliest recorded massacres of the Jews (known as Pogroms) took place in the year 38, in Alexandria, Egypt. The Romans placed restrictions on the Jews and isolated them to certain areas of the city, before killing and torturing them. Many early persecutions of the Jews took place because Christians falsely blamed the Jews for the Roman execution of Christ and this led to the Jews being isolated and excluded from European society at the beginning of the medieval period. The Christian's continued this persecution from the 1000's-1200's, when the Crusades were instigated to rid Jerusalem of non-Christians'. Although the Crusades were against all non-Christians', the focus of the attacks was in fact the Jewish people. In the 1300's, the Christians' blamed The Jews for introducing the Bubonic Plague that killed one third of the European population. Because the cause of this plague was not known, the easiest solution was to blame the already hated Jews (they were the only non-Christians' in the affected countries). ...read more.

What had I to thank Him for?" Those that were not killed, had to live with many unanswerable questions, and on watching a young boy being hanged, a man behind Wiesel asked, "Where is God now?" Wiesel, answering within himself said; "Where is He? Here He is hanging here on this gallows..." The God that Wiesel prayed to, worshipped and had loved for so long, died to him at that moment. It is not that he denies God, but has questions in his existence. How could He allow suffering, torture and death of so many innocent people and not even justify his silence? (iii) Explain the views of a different Jewish writer in response to these questions; Eliezer Berkovits was a leading rabbi, theologian and teacher, who wrote many books, including "With God in Hell", and "Faith after The Holocaust." During the holocaust, Berkovits did not blame God for the suffering and pain the Jews were put through, nor did he blame God for not intervening and saving the millions in the concentration camps. Like many others, Berkovits held a strong belief that God gave human beings free will, and it is up to the individual to use this as he or she wishes. Berkovits views express that God does not cause or purposely inflict pain and suffering on human beings, but we the human beings do. ...read more.

From 1975-1979, The Cambodian genocide caused over one and a half million people to lose their lives. This genocide was similar to the holocaust as millions were sent to work camps and it was undocumented at the time. During 1994 genocide took place in Rwanda, and over one hundred days a systematic slaughter of men, women and children took place, killing approximately 800,000 people. The following year another genocide took place in Srebrenica, 8,000 Muslim men and boys were killed, and many women and children were tortured, raped and killed. These are just a few of the genocides in recent years, and ethnic cleansing, for example in East Timor, and massacres are also taking place all over the world. Although these disasters are not on the same scale as the holocaust, the simple similarity is that millions are being killed for ethnic reasons and the world still turns a blind eye. A country might not want to get involved in the prevention of these massacres as it could mean having to go to war, and along with the trading they might lose from other countries, the economy would suffer huge affects. Finally, I believe that although there has not been a disaster on the same scale as the holocaust, genocides have taken place. This proves history repeats itself and unless The United Nations and International Community draws up a universal Declaration of Human Rights, ethnic cleansing will continue to happen. ...read more.