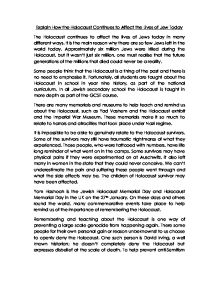 Explain How the Holocaust Continues to Affect the Lives of Jew Today The Holocaust continues to affect the lives of Jews today in many different ways. It is the main reason why there are so few Jews left in the world today. Approximately six million Jews were killed during the Holocaust, but it wasn't just six million, one must realise that the future generations of the millions that died could never be a reality. Some people think that the Holocaust is a thing of the past and there is no need to emphasise it. Fortunately, all students are taught about the Holocaust in school in year nine history, as part of the national curriculum. ...read more.

We can't underestimate the pain and suffering these people went through and what the side effects may be. The children of Holocaust survivor may have been affected. Yom Hashoah is the Jewish Holocaust Memorial Day and Holocaust Memorial Day in the UK on the 27th January. On these days and others round the world, many commemorative events take place to help remind us of the importance of remembering the Holocaust. Remembering and teaching about the Holocaust is one way of preventing a large scale genocide from happening again. There some people for their own personal gain or reason unbeknownst to us choose to openly deny the Holocaust. ...read more.

We are easily able to visit concentration camps were the Nazi's imposed 'the final solution', which was Hitler's plan to eliminate the all Europe's Jew's. A plan that Gordon Brown wishes to implement, is to send two six formers from every school to Auschwitz. When they return they can share their journey and what they gained from it with their classmates. Hopefully, this will help prevent anti-Semitism. I feel that the Holocaust, as tragic as it was, strengthened the Jewish people as a whole. I believe this because through adversity, it allowed us the strength to come together to help to form the State of Israel. As a result of the Holocaust, we as Jews now have the right to go back Israel when ever we please. This result is a safeguard for all Jews in case of persecution. ...read more.