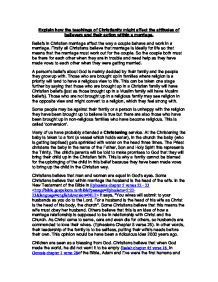 Explain how the teachings of Christianity might affect the attitudes of believers and their action within a marriage.

Explain how the teachings of Christianity might affect the attitudes of believers and their action within a marriage. Beliefs in Christian marriage affect the way a couple behave and work in a marriage. Firstly all Christians believe that marriage is ideally for life so that means that the marriage must work out for the couple. So the couple both must be there for each other when they are in trouble and need help as they have made vows to each other when they were getting married. A person's beliefs about God is mainly decided by their family and the people they grow up with. Those who are brought up in families where religion is a priority will tend to have a religious view to life. This can be taken one stage further by saying that those who are brought up in a Christian family will have Christian beliefs (just as those brought up in a Muslim family will have Muslim beliefs). Those who are not brought up in a religious family may see religion in the opposite view and might convert to a religion, which they feel strong with. Some people may be against their family or a person is unhappy with the religion they have been brought up to believe is true but there are also those who have been brought up in non-religious families who have become religious. ...read more.

Wedding customs in Christianity vary according to the family's culture, race or ancestors. The reason they believe that marriage should be for life is that it's the best environment for the family to have children. In marriages the bride and groom would get married at the church with either sides family at the wedding to witness the marriage. The bride would usually wear white to symbolise purity and would be accompanied by maybe bridesmaids who would hold her long dress and throw confetti around her and the groom would wear black. The bride and groom would make vows and promises to comfort and to love each other through sickness and through health and to never part each other till death. In Christian marriage men and women are thought to have different roles in their relationship within the family. God says that men and women are equally valuable to God, but they were created for different reasons and purposes. In the book of Genesis it says that Adam was created first and Eve was created later because God believed that says it's not good for man to be alone, as he needs a companion. ...read more.

He can't be perfect at it and that's okay, but he is responsible for carrying out his duties as a husband and for loving his wife as Christ loved the church (Eph. 5:25). It is love in the family that sets the up the marriage. He is responsible for the well being of the family. Beside from where women must lead due to divorce, widowhood, separation, etc., if the woman is the leader in the family it is because the man has not taken his proper place. This is the role of the wife, her responsibility in marriage is to simple respect, honour, and supports her husband. She is to encourage him to be the leader. Many women will not like it, the woman's primary responsibility is to take care of the home (Tit. 2:3-5) and to make it a suitable place for the family to live in as she helps her husband and nurtures the children with love. Of course, the husband and wife are both responsible for helping each other as they love each other but the primary duty of a husband is to love and provide. The primary duty of a wife is to nurture and respect. Bringing children into a family is perfectly OK in Christian's view as long as they are nurtured in the way of Christian beliefs. ...read more.