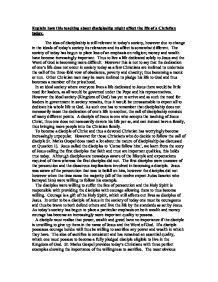 Explain how this teaching about discipleship might affect the life of a Christian today. The idea of discipleship is still relevant in today's society, however due to change in the ideals of today's society its relevance and its affect is somewhat different. The society of today has begun to place less of an emphasis on religion; money and wealth have become increasingly important. Thus to live a life dedicated solely to Jesus and the Word of God is becoming more difficult. However this is not to say that the dedication of one's life does not occur in society today as a few Christians are inclined to undertake the call of the three-fold vow of obedience, poverty and chastity; thus becoming a monk or nun. Other Christian men may be more inclined to pledge his life to God and thus becomes a member of the priesthood. In an ideal society where everyone lives a life dedicated to Jesus there would be little need for leaders, as all would be governed under the Pope and his representatives. However the ideal society (Kingdom of God) has yet to arrive and as such the need for leaders in government in society remains, thus it would be unreasonable to expect all to dedicate his whole life to God. ...read more.

People in the modern society are often reminded of the significance of material possessions in the world. As well as this due to the increase in medical technology citizens in the modern society are beginning to live longer and some feel the future life is unimportant. The main quality that disciples are expected to possess is love of God and love of neighbour. A study of St. Marks Gospel is expected to make a Christian contemplate the responsibilities that they possess as a witness in continuing the Kingdom of God. In order to continue the Kingdom of God a disciple must retain disciple-like qualities as the Kingdom of God is based entirely on these qualities. Disciples should possess all the qualities mentioned above, as well as be willing to show mercy and forgiveness to others. Jesus' sacrifice on the cross is one of the best examples available to all disciples in order to realise the extent to which they must forgive others. On the cross Jesus died in order to forgive the sins of those who persecuted him, ironically his persecutors committed the greatest sin that was ever to be committed by persecuting Jesus. In dying on the cross Jesus is also showed courage to accept suffering for justice. ...read more.

Obviously the cost of discipleship in modern times in rarely thought of as persecution, however disciples do still suffer consequences due to being a disciple. For instance to be a committed disciple of Jesus a Christian must follow the example set by him, as a 'servant' instead of as a 'Gentile Lord'. Thus true disciples must not be worried about the position of power or their social status and instead always think about the lives and wellbeing of others. In conclusion the interpretation as to how discipleship affects modern day Christians ranges from every individual. Many Christians take it upon themselves to carry out missionary work for part of their life, this missionary work may include visiting areas of extreme poverty, or caring for children who are unable to care for themselves or have been abused earlier in their life. Other Christians may heal the sick, i.e. become a doctor or nurse, why others obviously pledge their life to Jesus and God by being ordained into the priesthood. Finally other disciples chose to raise a family, and raise their children as Christians thus they themselves spread the word of God. All of these lifestyles have originated from St. Marks Gospel and its teaching of discipleship. Overall the teaching of discipleship in St. Marks Gospel affects the everyday life of disciple and the choices in which they may be forced to make. ...read more.