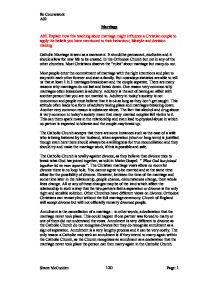 Explain how this teaching about marriage might influence a Christian couple to apply the beliefs you have mentioned to their behaviour, lifestyle and decision making.

Marriage A02. Explain how this teaching about marriage might influence a Christian couple to apply the beliefs you have mentioned to their behaviour, lifestyle and decision making. Catholic Marriage is seen as a sacrament. It should be permanent, exclusive and it should allow for new life to be created. In the Orthodox Church but not in any of the other churches. Most Christians observe the "rules" about marriage but many do not. Most people enter the commitment of marriage with the right intentions and plan to stay with each other forever and start a family. But nowadays statistics are able to tell us that at least 1 in 3 marriages breakdown and the couple separate. There are many reasons why marriages do not last and break down. One reason very common why marriages often breakdown is adultery. Adultery is the act of having an affair with another person that you are not married to. Adultery in today's society is not uncommon and people must believe that it is ok as long as they don't get caught. This attitude often leads to a form of adultery taking place and marriages breaking down. ...read more.

Annulment is a very lengthy process and it can be very costly. The only reason a Catholic may seek an annulment is if they intend to marry again within the Catholic Church, as the Church recognises an annulment as a declaration that the marriage never took place the person can then marry again in the Catholic Church. Marriage is exclusive. The couples love is exclusive and it cannot be shared with another person. Marriage demands faithfulness to one person. Marriage is a commitment to one person. The reading of St. Paul to the Ephesians 5:21-33 tells us of the exclusiveness of marriage. "Each one of you should love his wife as himself, and the wife should respect her husband." If the couple are to honour their vows they must honour the exclusiveness of their marriage. They must stay faithful to their husband/wife. In today's society many married couples do not seem to understand the importance of exclusiveness in a marriage. They nearly seem to think that it is ok to have an affair with another person as long they do not get caught. This attitude often is the cause of the great number of married couples splitting up. ...read more.

The Catholic Church are completely against the use of artificial contraception. The Church believe that the act of sexual intercourse should allow for the birth of a child which cannot happen if artificial contraception is used. The believe in using the 'Billings Method' which is based around the woman's fertile time. Other Churches such as the Church of England and Methodist teach that contraception is an acceptable way of preventing unwanted pregnancies. Society believe that contraception is a very acceptable way to prevent the unwanted birth of children who may not be looked after. Sex in the eyes of the Catholic Church is not acceptable unless the couple are married, no matter what the circumstances. The Catholic Church do not believe in artificial family planning even though the cost of rearing children and the importance of careers have to be considered. The Catholic Church are completely against abortion. They believe that abortion is against the 5th commandment: "You shall not kill". All other Churches are completely against abortion, unless the mothers live is in danger in which some Churches accept abortion. From my studies I can conclude that marriage is still expected to be permanent, exclusive and live-giving, but in today's society many factors hinder the expectations and marriages often break down. ?? ?? ?? ?? Re Coursework A02 Shane McCudden 12D Page: 1 ...read more.