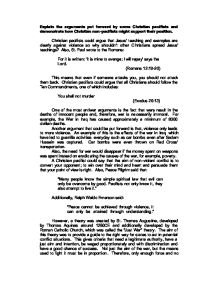 Explain the arguments put forward by some Christian pacifists and demonstrate how Christian non-pacifists might support their position. Christian pacifists could argue that Jesus' teaching and examples are clearly against violence so why shouldn't other Christians spread Jesus' teachings? Also, St. Paul wrote to the Romans: For it is written: 'It is mine to avenge; I will repay' says the Lord. (Romans 12:19-20) This means that even if someone attacks you, you should not attack them back. Christian pacifists could argue that all Christians should follow the Ten Commandments, one of which includes: You shall not murder (Exodus 20:13) One of the most antiwar arguments is the fact that wars result in the deaths of innocent people and, therefore, war is necessarily immoral. For example, the War in Iraq has caused approximately a minimum of 8000 civilian deaths. ...read more.

Additionally, Ralph Waldo Emerson said: "Peace cannot be achieved through violence, it can only be attained through understanding." However, a theory was created by St. Thomas Augustine, developed by Thomas Aquinas around 1250CE and additionally developed by the Roman Catholic Church, which was called the "Just War" theory. The aim of this theory was to provide a guide to the right way for states to act in potential conflict situations. This gives criteria that need a legitimate authority, have a just aim and intention, be waged proportionately and with discrimination and have a good chance of success. Not just the aim of the war, but the means used to fight it must be in proportion. Therefore, only enough force and no more should be used. Consequently, retaliating with a nuclear weapon in would make that war unjust, even though the cause of the war may be just. ...read more.

Violence is sometimes necessary in order to protect the weak and enforce law and order in society. That is the reason why policemen carry with them batons and guns. For example, in a violent rebellion, police need to use violence and force against the perpetrators as otherwise innocent civilians may get hurt or killed. Non-pacifists could additionally argue that if we are improving peoples' lives, we are right to go to war. This is the message given by Isaiah: "Is this not the king of fasting I have chosen: To loose the chains of injustice and untie the cords of the yoke, to set the oppressed free and to break every yoke?" (Isaiah 58:6) Also, most societies and people regard going to war as fulfilling a citizen's ethical duty, they honour and remember those who gave their lives in wars, for example, the Second World War. ...read more.