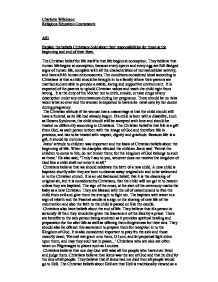 Explain the beliefs Christians hold about their responsibilities for those at the beginning and end of their lives.

Charlotte Wilkinson Religious Education Coursework A01 Explain the beliefs Christians hold about their responsibilities for those at the beginning and end of their lives. The Christian belief for life itself is that life begins at conception. They believe that human life begins at conception, because every sperm and every egg are full-fledged signs of human life, complete with all the characteristics of normal cellular activity, and have all 46 human chromosomes. The conditions considered ideal according to Christians is that a child should be brought in to a family where their parents are married and are able to provide a stable, loving and supportive environment. It is expected of the parents to uphold Christian values and teach the child right from wrong. It is the duty of the Mother not to drink, smoke, or take drugs of any description under any circumstances during her pregnancy. There should be no risks taken what so ever and the woman is expected to have ante- natal care by her doctor during pregnancy. The Christian attitude if the woman has a miscarriage is that the child should still have a funeral, as its life had already begun. If a child is born with a disability, such as Downs Syndrome, the child should still be accepted with love and should be treated no differently according to Christians. The Christian belief is that life is a gift from God, as each person is born with the image of God and therefore life is precious, and has to be treated with respect, dignity and gratitude. ...read more.

The decision to have an abortion is never easy but no one is better suited than the woman concerned to make that decision. The Catholic Church teaches that when God gives the child a soul, this takes place at the moment of conception and this has been a key reason for their refusal to condone abortion. Christians believe that even in the womb, the unborn child still has a right not to be killed. People even with the most awful of handicaps have still gone on to leave happy, creative, rewarding and fulfilling lives. Abortion is very often referred to by many Christians as being discrimination against the weak. The Protestant Church is reluctant to take such a hard line as Catholics do in the abortion debate. It accepts that there are certain situations when abortion is an unavoidable consequence of deciding between two evil situations. There are certain situations when it is considered by the protestant church to be acceptable such as if the woman is raped and becomes pregnant, then offering an abortion is a humane and practical way of helping her. Both the Catholic and the Protestant Churches accept abortion when the life of the mother is in danger as a result of her being pregnant. There are some Christians who believe the Bible says nothing about abortions. In one sense this is true. There is no direct teaching that says 'You shall or you shall not allow a woman to have an abortion.' ...read more.

They may also say that a suffering person has the right to end their own lives and that there should definitely not be a ban against Euthanasia. Other people may disagree with this viewpoint and say that what a person decides and chooses to believe affects others, such as family, friends, child in womb or an ill person. Also, what a person decides affects everyone around them and beliefs should not be decided under selfish means. They might believe that no person has a right to end their own life and God should be the only person to decide when life should end because God is the creator and giver of life and life is a gift from him that we should be grateful for. They might argue that there should be laws to prevent abortion because the unborn baby is a separate human being and life and vulnerable lives should be protected within society. Also, the sick, weak, young and old should be protected by society. They may think that Christians should all hold one belief and that it should not be decided by any one separate person. They may expect a proper Christian not to make their own beliefs about life, but to only follow the commandments and teachings of the Christian society. In conclusion I believe that what Christians believe about life should be left up unto them because every single person has the right to believe and express their own opinions. I would argue that people's views should be respected and accepted by everybody. ...read more.