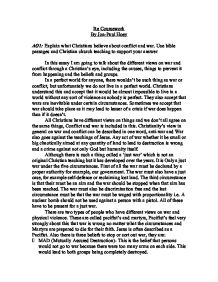 Explain what Christians believe about conflict and war. Use bible passages and Christian church teaching to support your answer

Re Coursework By Jon-Paul Hoey AO1: Explain what Christians believe about conflict and war. Use bible passages and Christian church teaching to support your answer In this essay I am going to talk about the different views on war and conflict through a Christian's eye, including the causes, things to prevent it from happening and the beliefs and groups. In a perfect world for anyone, there wouldn't be such thing as war or conflict, but unfortunately we do not live in a perfect world. Christians understand this and accept that it would be almost impossible to live in a world without any sort of violence as nobody is perfect. ...read more.

Any act of war whether it be small or big chaotically aimed at any quantity of land to lead to destruction is wrong and a crime against not only God but humanity itself. Although there is such a thing called a 'just war' which is not an original Christian teaching but it has developed over the years. It is Only a just war under the five circumstances. First of all the war must be declared by a proper authority for example, our government. The war must also have a just case, for example self-defence or reclaiming lost land. The third circumstance is that their must be an aim and the war should be stopped when that aim has been reached. ...read more.

Jesus is often described as a Pacifist. Also there is three beliefs to stop or sort out war, they are: * MAD (Mutually Assured Destruction)- This is the belief that persons would not go to war because there were too many arms on each side. This would lead to both groups being completely destroyed. * The Arms Race- This is where both group's are trying to out do each other. * Unilateral/Multilateral Disarmament- Uni: This is the belief where, one group says 'I'll destroy my weapons first and you shall follow. Multi: This is the belief where individuals believe that one or the other has to start a process of destroying their weapons. By Jon-Paul Hoey ...read more.