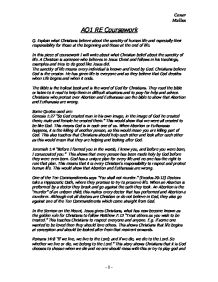 Explain what Christians believe about the sanctity of human life and especially their responsibility for those at the beginning and those at the end of life.

Q. Explain what Christians believe about the sanctity of human life and especially their responsibility for those at the beginning and those at the end of life.

In this piece of coursework I will write about what Christian belief about the sanctity of life. A Christian is someone who believes in Jesus Christ and follows in his teachings, examples and tries to do good like Jesus did.

The sanctity of life means every individual is known and loved by God. Christians believe God is the creator. He has given life to everyone and so they believe that God decides when Life begins and when it ends.

Some Quotes used are:

Genesis 1:27 “So God created man in his own image, in the image of God he created them; male and female he created them.” This would show that we were all created to be like God. This means God is in each one of us. When Abortion or Euthanasia happens, it is the killing of another person, so this would mean you are killing part of God. This also teaches that Christians should help each other and look after each other as this would mean that they are helping and looking after God.

Jeremiah 1:4 “Before I formed you in the womb, I knew you, and before you were born, I consecrated you.”This shows that every person has been made holy by God before they were even born. God has a unique plan for every life and no one has the right to ruin that plan. This means that it is every Christian’s responsibility to respect and protect human life. This would show that Abortion and Euthanasia are wrong.

One of the Ten Commandments says“You shall not murder.” (Exodus 20:13)Doctors take a Hippocratic Oath, where they promise to try to preserve life. When an Abortion is preformed by a doctor they break and go against the oath they took. An Abortion is the “murder” of an unborn child; this makes every doctor that has performed and Abortion a murderer. Although not all doctors are Christian or do not believe in God, they also go against one of the Ten Commandments which come straight from God.

In the Sermon on the Mount, Jesus gives Christians, what has now become known as the golden rule for Christians to follow Matthew 7:12 “Treat others as you wish to be treated.” This teaches Christians to respect everyone and anyone. E.g. if some one wanted to be loved then they should love others. This shows Christians that life begins at conception and should be looked after from that moment onwards.

Romans 14:8 “If we live, we live to the Lord; and if we die, we die to the Lord. So whether we live or die, we belong to the Lord.”This story shows Christians that it is God chooses to choose when we die and no one should mess with this or try to play god and choose for him. Also this shows to Christians that they live because God gave them the gift of life and they should not abuse their gift by stopping someone else’s life going on.

Christians are also guided by the teaching of the church. Quotes from the life Catechism of the Catholic Church:

“Human life is sacred because from its beginning it involves the creative action of God and it remains for ever in a special relationship with the Creator, who is its sole end: no one can under any circumstance claim for himself the right directly to destroy an innocent human being.”Christians believe that God creates each and every one of us specially and no person should go against what God wants for us. No person can give themselves the right to destroy an innocent human being which is murder and therefore believed that Abortion and Euthanasia is the opposite of what the Church teaches.

There are also other factors that influence the beliefs of a Christian;

A hospice is a place where the terminally ill go. People are provided with medical care, counselling and support to patients and their families. If there were better facilities for care for the dying, there would be less need for euthanasia. People would then be cared for and die without or at least less pain.

There is also the LIFE Campaign which says, “Since human life begins at conception and since life should be equally protected by the law from conception to natural death, whether or not the human being concerned is wanted or handicapped, it follows that the destruction of unborn life is always wrong.”This means that nothing can cause an unborn child to be aborted, not being disabled, being deformed, nothing, in all cases abortion is still wrong.

In conclusion, I answered this question from the facts I have collected from bibles and the internet and text books.0 I have found in all that the belief of a Christian is strongly against all cases of abortion and do not accept it unless the mothers and child’s life is at risk.