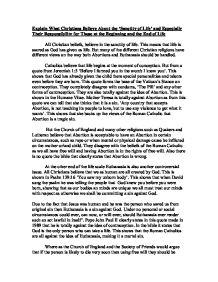 Explain What Christians Believe About the Sanctity of Life and Especially Their Responsibility for Those at the Beginning and the End of Life.

All Christian beliefs, believe in the sanctity of life. This means that life is sacred as God has given us life. But many of the different Christian religions have different views on the way both Abortions and Euthanasia should be handled.

Catholics believe that life begins at the moment of conception. But from a quote from Jeremiah 1:5 ‘Before I formed you in the womb I knew you’. This shows that God has already given the child there special personalities and talents even before they are born. This quote forms the base of the Vatican’s Stance on contraception. They completely disagree with condoms, ‘The Pill’ and any other forms of contraception. They are also totally against the idea of Abortion. This is shown in the Humane Vitae. Mother Teresa is totally against Abortion as from this quote we can tell that she thinks that it is a sin. ‘Any country that accepts Abortion, is not teaching its people to love, but to use any violence to get what it wants’. This shows that she backs up the views of the Roman Catholic that Abortion is a tragic sin.

But the Church of England and many other religions such as Quakers and Lutheran believe that Abortion is acceptable to have an Abortion in certain circumstances, such as rape or when mental or physical damage cause be inflicted on the mother or/and child. They disagree with the beliefs of the Roman Catholic as we all have free will and having Abortion is in the rights of free will. Also there is no quote the bible that clearly states that Abortion is wrong.

At the other end of the life scale Euthanasia is also another controversial issue. All Christians believe that we as human are all created by God. This is shown in Psalm 139:16 ‘You saw my unborn body’. This shows that when David sung the psalm he was telling the people that  God knew you before you were born, showing that as our bodies an minds are unique we all must treat our minds with respect as otherwise we shall be committing a sin against God.

Due to the fact that Jesus was human and he was the person who saved us from original sin then Euthanasia is a sin against God. Under no personal or social circumstances could ever, can now, or will ever, should Euthanasia ever render such an act lawful in itself". Pope John Paul II clearly states in this quote made in 1989 that he is totally against the idea of contraception. In the bible it states that God is the only person who can take a life. This shows that the Roman Catholics are all against the idea of Euthanasia, making it a mortal sin.

Where as the Church of England and the Society of Friends would argue that if the person is likely to die very soon then using free will they should be allowed to use euthanasia as they no that they are going to die any way. Also they believe that someone should not be put to sleep immediately, but they can stop taking the medication that is keeping them alive to speed up the death. But this can cause the law trouble as they cannot tell completely what has happened. In the law it is illegal to have euthanasia performed on you. If you were found guilty you would have to face charges of man slaughter. In the it says that death is not the end of the road only the end of the first part.